Rihanna managed to make an athletic mash-up of surf, motocross and rock climbing looks into a vibrant collection that held its own. 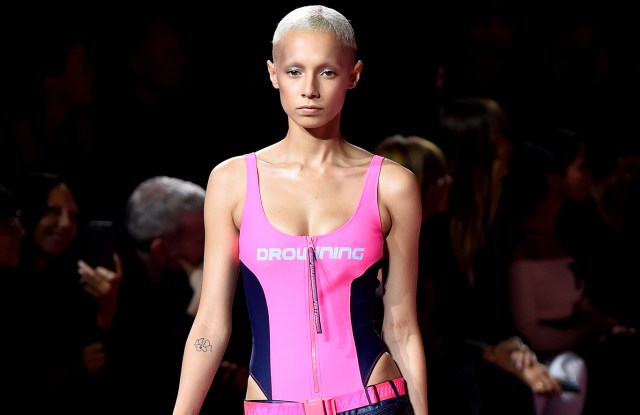 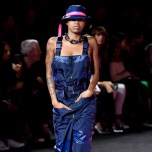 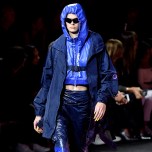 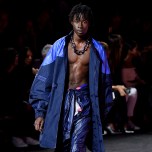 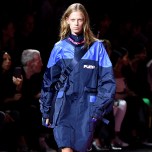 Those casting doubt about the relevance of runway shows, talk to Rihanna. She’s doing a hell of a job keeping it fresh and fun with Fenty Puma by Rihanna. Granted she’s a mega-celebrity with an off-the-charts likability factor, but still, her spring show was for the most part a traditional fashion show held at no less a familiar venue than the Park Avenue Armory, which has already been broken in this season by Tom Ford. Her show had as much gusto as his and probably more surprise. She’s taking this project seriously.

The set was a pair of pretty pink sand dunes over which several BMX bikers flew in a series of insane X Games-level aerial stunts to open the show. After last season’s show of schoolyard stereotypes and the 18th-century girly sport of the season before, Rihanna went in an entirely different direction with a hyper-athletic mash-up of surf, motocross, rock climbing and all things extreme sport. “It’s a lot more scaled down in terms of silhouette compared to what we’ve done before,” she said backstage before the show. “We’ve done a lot of oversized, superlong sleeves and superbell legs, and now the girls are in super body-con looks I felt like we hadn’t done before.”

There were windbreakers and biker shorts, hoodies, racing pants, and for the first time, swimwear. Everything was torqued with athletic straps and buckles and emblazoned with Puma branding as well as words like “wet” and “drowning” in fast, graphic fonts. The colors were classic sports-born combos of navy and hot pink, black and fiery red, pool blue and white and hunter green and navy. The tight stuff was tight, but there was oversized stuff too that had a current street flavor. Everything was styled to the nines with attitude and a sense of humor. A strapless wetsuit with a yin-yang graphic was improbably sexy, as was a looser flight suit. One guy in white shorts, white socks and shower slides managed to make wearing a towel on his head into a look. And once again Rihanna managed to make athletica, one of the most widely mined concepts in current fashion, into a vibrant collection with a point of view that can hold its own.