Oliver's penchant for deconstruction shone through in many of the pieces, aimed at a new generation of Helmut Lang followers. 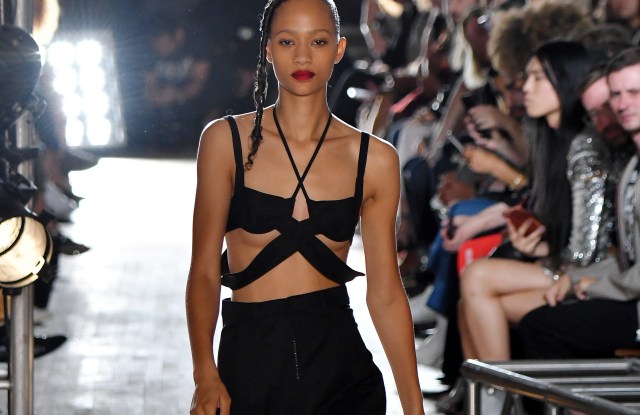 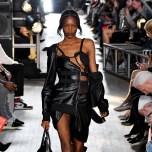 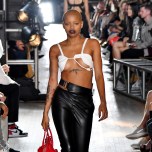 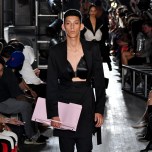 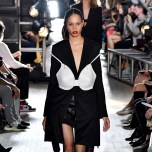 The worlds of Helmut Lang and Shayne Oliver collided Monday night as the former Hood by Air designer put his distinct yet complementary stamp on the venerable label.

Many of the influences were the same — bondage, fasteners, metallics, monochromatic whites and lots and lots of black leather. The collection also featured a lot of Helmut Lang branded references. But Oliver’s penchant for deconstruction shone through in many of the pieces, providing the right balance to the overall collection.

Women’s looks channeled the brand’s history of provocation with Oliver’s disruptive spirit. Were all the looks refined? Not quite. But they didn’t aim to be. Oliver was tasked with moving the conversation, sure to be divisive, back to the brand and incite a new following. Oddly shaped bras and bustiers, open-seam trousers and daring displays of skin for both day and evening winked at a kinkier and more adventurous customer. Elements of subtle subversion worked best, as in a tailored coat with open back, fitted pants with raised waistbands and a great red coat that balanced bondage and drama with approachability.

In men’s, the tailored top coats were a highlight along with the fastening cummerbund worn with a pink shirt that made the look feel modern. There were also humorous touches such as a ring binder briefcase, a leather bra bag and leather bibs. But the overt sexuality felt a little desperate at times as did a monochromatic white blazer/shirt worn by a model with long hair and a mustache that looked more Borat than Helmut Lang.