The collection offered pop-art influences and embellishments for its fun, eclectic spring outing. 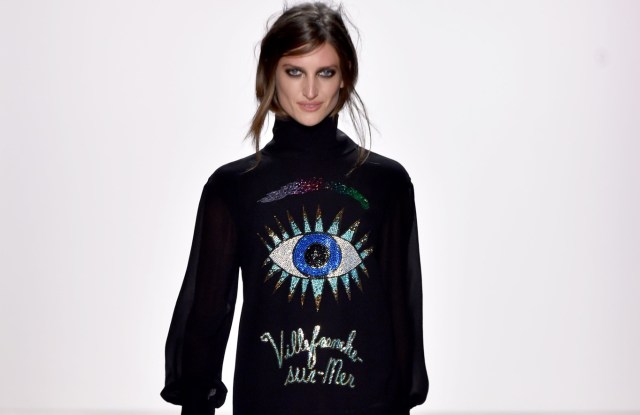 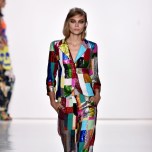 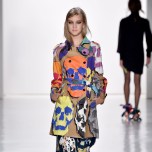 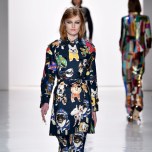 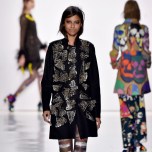 Hurricanes, nuclear threats and infuriating political posturing were all forgotten — at least a little while — Monday afternoon. Thanks, Johnson Hartig.

The designer of Libertine trotted out an energetic collection that he cheerfully described as “all over the map.”

But while the influences may have been eclectic — pop art, canines and bananas — the end result was an upbeat, uplifting take on the spring season.

Hartig didn’t stray far from his DNA, offering up an array of embellished jackets, coats and dresses in a rainbow of colors. “I never met a color I’m not infatuated with,” he said.

But there were a lot more dresses than in seasons past. “I kept hearing from the ladies that they just wanted to put on one thing and be finished,” he said.

Although there were still plenty of the highly decorated, appliquéd pieces that have become a hallmark of the brand, Hartig also toned it down a bit — for him — with a couple of slinky sequined evening outfits, including one with red straps that lent a playful touch.

He used the same sequined design as a panel on a men’s hoodie and shorts outfit, providing an eye-opening option for the customer seeking another take on ath-leisurewear.

Hartig’s love of campy prints came through in the use of a banana pattern he used on a silk short set for women and an overshirt over track pants for men. The fruit also hung off of the bottom of a black beaded dress.

Hartig used see-through lace on skirts and dresses that looked sexy on the women and slightly pornographic on the guys.

But at the end, after the models danced their way down the runway, Hartig could count spring as another fun and humorous outing for the Libertine label.

Hartig summed it up this way: “This is a really joyful collection in a challenging time.” We couldn’t agree more.