Everything on the designer's runway was exaggerated to the nth degree — proportion, color, prints and juxtaposition. 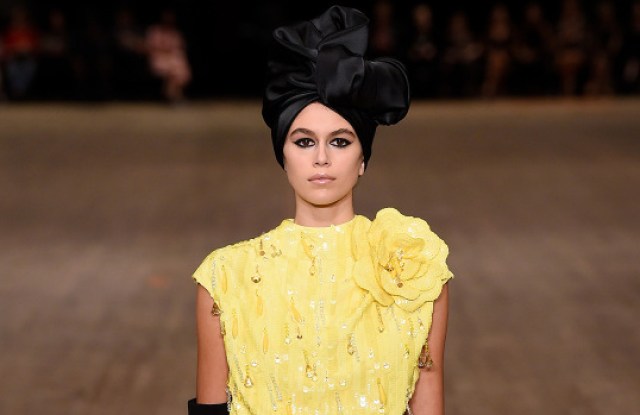 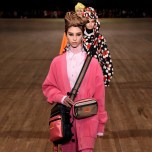 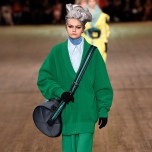 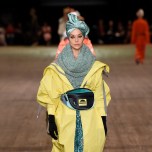 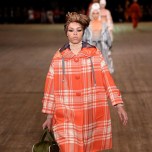 An exasperated Marc Jacobs made that declaration — again — when asked if his finale music carried a message of goodbye. After his models walked the perimeter of the cavernous Park Avenue Armory in total silence, they reemerged to a piece from Alfredo Catalani’s opera “La Wally.” In part, it translates, “Ah, well, then! I shall go far away.”

“It’s not ironic, it’s not sarcastic, it’s not a goodbye,” Jacobs said of the musical choice. “It’s from the cult classic Eighties French New Wave film ‘Diva,’ which I love. I don’t know how to win. I’m not that versed in opera. I’m much more versed in film. Steve Mackey, who does the music, and I thought it was a beautiful piece of music. I didn’t even know the translation. Sometimes an aria is just an aria.”

And sometimes, a fashion show delivers major fashion. “There’s tons [going on],” Jacobs said. Indeed. He insisted that the collection had no deep, intellectual or conceptual springboard. It clearly progressed from last season’s ode to hip-hop style. “We’re calling the whole thing ‘Somewhere’ — from Sofia [Coppola]’s movie,” he said. “But also, last season was all about this urban landscape, and this is not about any [particular] landscape. It’s somewhere, I’m not sure where.”

Somewhere where the fashion is overt, unapologetic and at times overwhelming; where everything is exaggerated to the nth degree — proportion, color, prints, juxtaposition; where every girl loves a Stephen Jones turban, and some look like madcap Nefertitis in sparkles, and others, Little Edies in a parka. In fact, contrast keyed the collection, as fantasy-reality and high-low played out and fused in frenetic display. Jacobs achieved this thematic opposition by placing two genres of clothing — sports clothing and couture shapes — in audacious opposition. In a New York season largely quiet on the fashion front, his superior skill as a maker of clothes shone. Whether simple or intricate, his constructions were impeccable, and he piled on the excess  — jewels, fringe, boas, opera gloves — with an artist’s eye.

The result was a collection of clothes that screamed fashion. Some should thrive on the selling floor (cardigans, coats); some cry out for intelligent merchandising (dropped-crotch pants; the most gigantic outerwear); some exist for beauty’s sake, and to appeal to the fashion-obsessive set (sparkling gowns; beaded cage tops, an ode to Saint Laurent). Ditto the accessories. Bags in countless iterations and sizes looked plenty commercial. If the same can’t necessarily be said of dainty brocade boudoir slippers under explosive silk tassels, surely, they’ll strike the fancy of a few well-heeled feet heading, well, somewhere.