The designer introduced tailoring and knits into his supersized aesthetic. 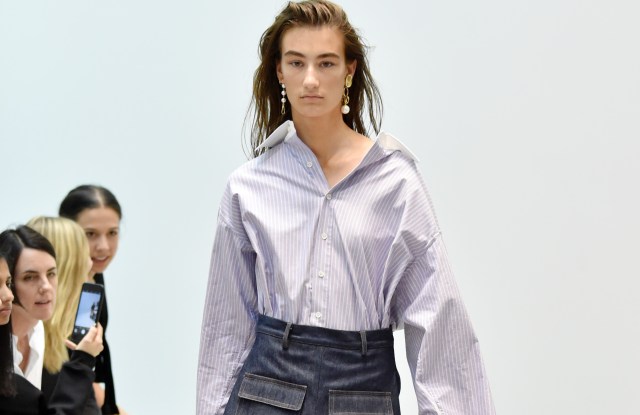 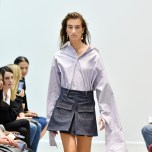 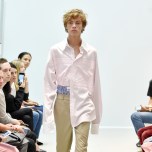 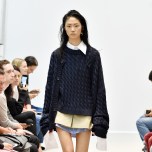 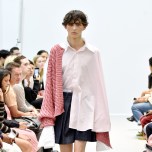 In fashion’s saturated show schedule, it’s rare to find a new designer who stands out, let alone generates any buzz. Matthew Adams Dolan has made quite the impression with his unapologetic use of yardage and off-beat, bunched-up and elongated silhouettes with gender-neutral undertones. His first runway show highlighted a distorted yet confident style of dress.

At a time of civil and political unrest, the designer was nostalgic for simpler times, looking at the legacy of American style during the Bruce Weber-era and its effects on classic American dress now. Given his streetwear-leaning inclinations, khakis, denim and knits were reworked in supersized proportions and off-kilter designs. Deconstructed knits were cut with ample room in marigold and magenta and worn askew. Denim was reimagined with a tailored coat with angular lines and extended sleeves. A subversive thread continued with novelty shirting, which has had its moment the past few seasons and didn’t feel as fresh; the tamer pin-striped versions with exaggerated cuffs were an exception, toying with proportion when styled under short skirts.

The designer had never tried his hand at tailoring until Rihanna asked him to create a suit for her to wear to the Parsons Benefit gala in May. The beige overly oversize double-breasted number she wore created quite the buzz and led him to include tailoring for the first time. She proved to be good practice, as a black jacket with pumped-up shoulders and a plaid coatdress were more sophisticated standouts.

While much of the collection was unisex, Dolan’s progressive take on men’s wear was a welcome addition. He took familiar pieces such as pinstripe suits and oxford shirts, elongated the sleeves and blew out the pant legs to make them his own. There was also an interesting mix of man-meets-boy in the use of an oversized banker stripe shirt with matching boxer shorts. A pair of flared short-shorts that read “miniskirt” diluted the message but overall, the collection was fresh, playful and full of promise.