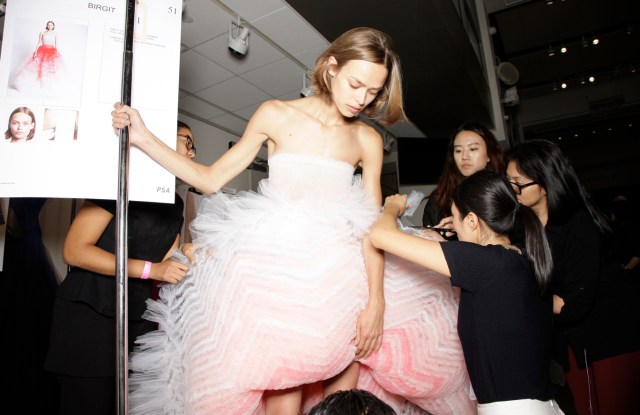 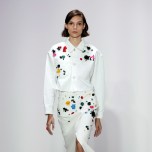 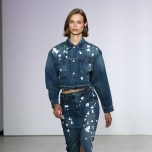 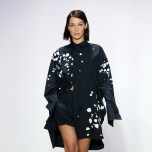 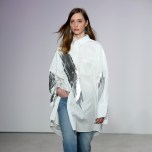 In developing their second runway collection for Oscar de la Renta, Laura Kim and Fernando Garcia wanted to pay homage to the house founder in a personal way. They’d already developed a new logo — replacing the original, a variant of de la Renta’s handwritten signature — with his actual John Hancock, recognizable to many from Oscar’s penchant for warm hand-written notes. “It all started from his signature,” Garcia said during a preview. “We just started looking at that and all the people who wrote notes to the house thanking the house, and how personal people’s connection is with the house. We took it in a literal way that was touching and fun.”

At the same time, and probably less fun, like everyone else in Tonyville, Kim and Garcia must negotiate fashion’s new, casual reality — how to make clothes relevant to today’s ever more dressed-down lifestyle while staying true to the house and still being distinctive enough to merit a luxury price tag. No easy task.

The pair approached the challenge head-on, upping the sportswear ante — Denim! White shirts! And they rendered the arty motif (they showed at Sotheby’s) with a wink, nod and painterly profusion: “splatters” rendered in prints and cheeky, flamboyant embroideries. It made for an audacious, buoyant collection, and a major improvement over last season.

On the personal elements, Oscar’s fine-line signature was drawn in black across a white shirt, sweater, dress, even a mink coat tossed on over a tummy-baring denim jacket and jeans.  From afar, the script might read as thin, imperfect loopy stripes; conversely, the letters of his name were exploded into giant graphics rendered in vibrant sequins on an otherwise delicate gown. The designers also co-opted incoming correspondence; notes Emma Watson and Elle Fanning wrote to them were translated into prints. Whether such fare, along with splattered jeans and shirting romper (even sequined-splattered) will fly chez de la Renta, who knows? Clearly those looks target a new, younger customer. Yet the designers won’t abandon their core client, wooing her with colorful, sporty separates. Some worked and some didn’t; blinding-bright blazers can swing snappy or elder-aunt. The collection’s other ouch, even with the addition of commercial underpinnings: those multicolor bonded leather on tulle collage affairs. Anyone more conservative than Helena Bonham Carter feeling frisky will probably pass. More successful evening looks went two ways, flamboyant arty columns and romantic embroidered and ombré’d tulles.