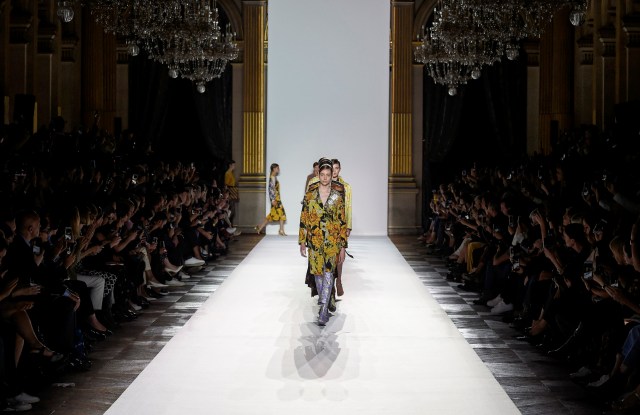 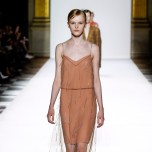 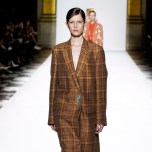 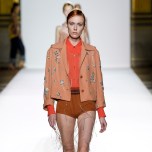 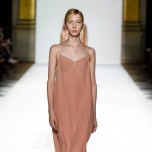 “The most important thing, I wanted to make it a very happy and optimistic collection,” Dries Van Noten said during a preview. “We always say fashion can be a reflection of what’s happening in the world. But fashion can be also be escapism. For me, it was really important to have that.”

Perhaps Van Noten rethought the upbeat thing right before the show and, unable to redesign his collection in a day, made some tweaks to the production. It’s hard to make The Ronettes bubbly 1964 ditty “Be My Baby” dirge-like, but DM Stith’s version, which dominated the soundtrack, does just that. It provided perfect accompaniment to the models’ stone-faced, lethargic runway walk.

Yet nothing could squelch the emotional buoyancy of Van Noten’s clothes — optimistic indeed and exquisitely so. As usual, prints defined the collection’s metrics, here a pastiche of origins and reference. Van Noten started with Picasso’s “Les Deux Demoiselles faisant leur Toilettes,” in which the artist eschewed paint in favor of a collage of found materials, mostly wallpapers of varying motifs. Van Noten became intrigued with the notion of (seemingly) random mixes.

“Instead of using really [specific] prints, we used all different elements. So we created this whole interpretation where you have a surreal lips, you have a Forties wallpaper motif, you have Sixties couture flowers. We have all these things.” And clouds and geometrics and on and on, all blended into a beautifully cohesive whole.

In a display of early discretion, Van Noten used his first several exits to introduce various essential elements. The first look out: a simple slipdress under transparent veiling dangling “diamonds” here and there. Then a mannish plaid coat worn closed, the only hint of an underpinning a vibrant scarf point floating beneath its hem. Then a lavishly bejeweled short jacket over a shirt, briefs and more transparency. Soon, a scarf-turned-camisole attached to a sheer shirt over jeans, a sweater falling off one shoulder over a multiprint scarf skirt and on and on, until the collage motif erupted into a chic euphoria of disparate color and pattern. Iridescent trench over a brown and beige printed shirt over lavender damask skirt; brocade baseball jacket with giant flowers and gold sleeves over cotton printed skirt and matching boots; cloud-print dress with pixilated windowpane sleeves.

Lest it all become too much, Van Noten inserted the occasional calming palette cleanser such as an elongated chemise dress in pale peach over pink. Along the way, he delivered all the essentials his exceeding loyal customers expect — shirtdresses, tailoring, knits, robes, embellishment, eveningwear that works the artful side of glamour. It’s what keeps them coming back — and happy.