The collection took a surprising turn, especially given their Parisian sojourn, toward the commercial. 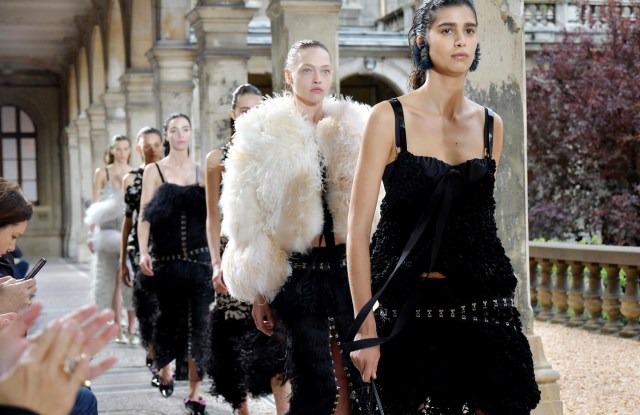 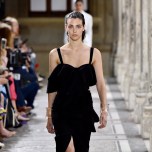 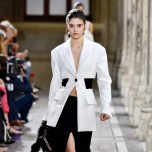 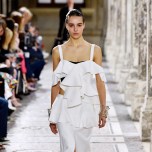 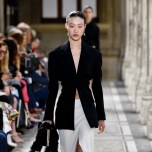 Thank you, Vincente Minnelli and Gene Kelly! Your “An American in Paris” is not just a catchy title, but a plot line that involves a Yankee arriviste trying to sell his art in the City of Light. How could fashion resist the appropriation?

As for the benefits these showtime expats sought to gain, while an often-articulated school of thought holds that the traditional fall and spring calendars are too late given the realities of the business, whether retailers will commit early and or more resources to still-small businesses is unclear. For the designers, escaping the severely overpopulated New York calendar in favor of assimilation into a more elegantly distributed schedule in July and January clearly proved attractive, as did  the potential for greater international exposure and to bask in the reflected glory of Paris — a lure with a risk factor as well, particularly during couture.

Both Proenza and Rodarte presented their spring 2018 collections in glorious Parisian courtyards, the former, in a school, and the latter, a onetime cloister, its arched portico arranged around a magical garden. Both collections featured ruffles, and there, the similarities ended.

McCollough and Hernandez sought to personify what they called in their show notes “a commitment to beauty, optimism and a celebration of French craft.” It took a surprising turn, especially given their Parisian sojourn, toward the commercial. Then again, perhaps not so surprising, as they combined both resort and spring into this single show. (Cheers for any smart idea that chips away at that monster of mundane, the endless resort season.) The move may in fact prove clever. It resulted in a lovely, interesting collection, one that telegraphed both their creative mojo — and they have plenty, even absent its most extreme expression in bold tribal motifs realized in intense artisanal work — and their ability to make clothes that appeal to a constituency beyond the hyper fashion-forward, which in the past hasn’t always translated on their major season runways.

Here, they worked with many of their signature themes, now rendered with a light touch — asymmetry, corsetry, artful exposure, the layering of seemingly unlike elements. This resulted in a dressed-up but relaxed attitude, whether in body-con ribbed knits that found a touch of edge in layered-on leather corset bras, or a white glamour jacket with black waist inset over a black front skirt.

Along the way, Hernandez and McCollough pumped cool into chichi tropes — a pair of simply cut lace dresses, each with a loose, vertical spill of a ruffle down the front, and more constructed evening looks crafted from countless rows of thin, densely packed ruffles. It made for a clear message of savvy chic.

Rodarte RTW Spring 2018: This collection epitomized the designers doing what they do — going glamorous, glorious and weird.

Maison Rabih Kayrouz RTW Spring 2018: This collection was conceived as an ode to women.