An ode to stoic calm, hope and regal beauty, the collection was designed to awe, not shock. 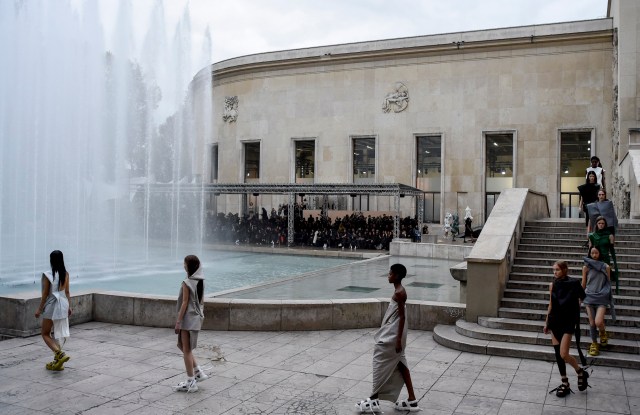 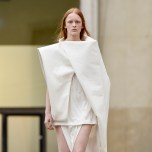 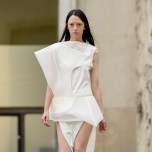 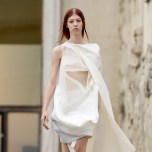 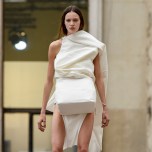 Rick Owens is aware of his reputation. “I have made a habit of maybe romanticizing doom,” he said after a spring show with which he reminded his guests of his remarkable ability to evoke many different moods within his very specific universe. Whereas in the past he has used his runway to shock — with step dancers, flyaway genitalia, people strapped to one another in uncomfortably intimate poses — here he delivered awe.

Thinking there’s enough sturm und drang to go around right now, Owens wanted his collection to celebrate the future and hope. He took his show out of the concrete bowels of the Palais de Tokyo and into its courtyard surrounding a still, square pool and lounging Hellenic statues. Each guest was given a poncho, and strongly encouraged to wear it. They soon found out why: Toward the end of the majestic procession of serene but otherworldly goddess creatures, the fountain came alive with soaring streams of water that misted onto the crowd. The soundtrack was the throaty, melodious and slightly maniacal laugh of a woman, who turned out to be Owens’ wife, Michèle Lamy. It’s a song from her band’s new album. “It was very joyful, it was giddy and infectious,” said Owens said of the laugh track. Definitions of giddy differ.

The main word he used to describe the lineup was “stoic.” In trying times, stoicism teaches that calm and acceptance are the way through. Owens translated that into designs that radiated regal, higher-plane tranquility with garments draped, bunched, cut and swirled into amorphous dresses and tops reminiscent of togas. They came in purist white, green, black and cement gray, styled with a single leg warmer and chunky Teva-like sandals with extra-long straps. Conceptual as always, the lineup crescendoed into body-consuming shapes done in bumps and blobs tangled in a web of stretch T-shirt material. Along the way, there were relatively straightforward long column dresses and tailored sweeping jackets. A series of beautiful, soft tops was done in panels of giant bugle beads and worn over softly draped jersey skirts. Owens said the subtle, glamorous beading was an indirect descendant of Thirties Hollywood, specifically Cecil B. DeMille’s bible epics. The big bags worn over the model’s bellies were internally referred to as “fertility bags,” meant to signify rebirth and optimism.

The collection radiated grace, but stoicism wasn’t exactly spot on. According to the philosophy, emotions must be controlled and overpowered. In this case, the whole point was to feel things.