This collection epitomized the designers doing what they do — going glamorous, glorious and weird. 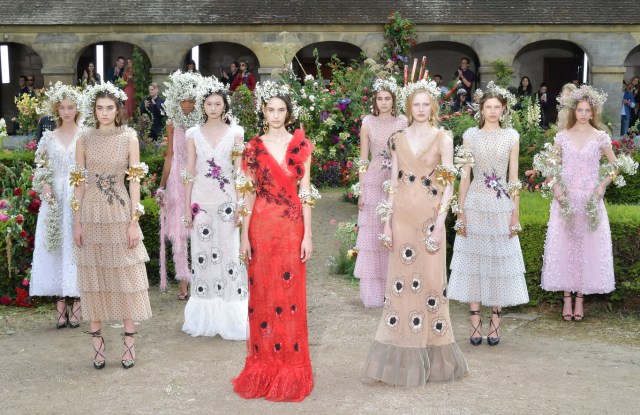 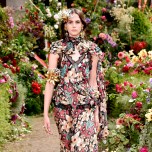 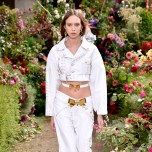 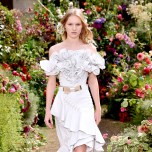 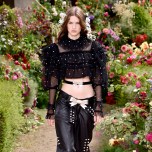 Rodarte’s Kate Mulleavy and Laura Mulleavy are among American fashion’s expats showing in the City of Light for the first time. In their Paris debut, the sisters delivered froth of the most beguiling sort. If any latent twinge of pragmatism dared invade their design process (which is doubtful), it was squelched by clouds of pastel tulle and lace, and a veritable field of baby’s breath, its bounty broken into multiple tiny bouquets sprinkled through the models’ hair and secured with metal bows by Odile Gilbert.

The show was inspired in part by Robert Altman’s “3 Women,” Laura Mulleavy said backstage. But, she added, references to the trio — dreamer, artist and intellectual — were abstract and organic, and the overall mood, signature. “We were saying that this is really an evolution of us doing what we do.”

She nailed it. This collection epitomized the designers doing what they do — glamorous, glorious and weird. Fearless, too, their models a band of otherworldly creatures done up in complicated, gentle dresses while traversing the cold stone floor en route to their natural home just past the arches — a lush garden. It was a combination of beauty and eeriness in the manner of the most compelling of fairy tales.

How to grow such a business? That question was not addressed in this show. The answer would be easier to secure were the fashion-buying population dominated by Elle Fannings and Zendayas — beautiful girls who can make mythic romance look like everyday trappings.

That’s not to say the Mulleavys’ vision isn’t scalable. The process has proven challenging, particularly translating their aesthetic into day clothes. This time in Rodarte land, biker chicks swapped in pearls and bows for regular hardware — unlikely to give yoga pants serious competition. Then again, that’s not what these designers are about. They want to grow their business strategically but not recklessly, while avoiding creative compromise. It’s a tough but noble goal — one fashion needs.

Proenza Schouler RTW Spring 2018: The collection took a surprising turn, especially given their Parisian sojourn, toward the commercial.

Maison Rabih Kayrouz RTW Spring 2018: This collection was conceived as an ode to women.