Michael Halpern was flexing his versatility for spring 2019, showing that there's more to his schtick than just sparkles 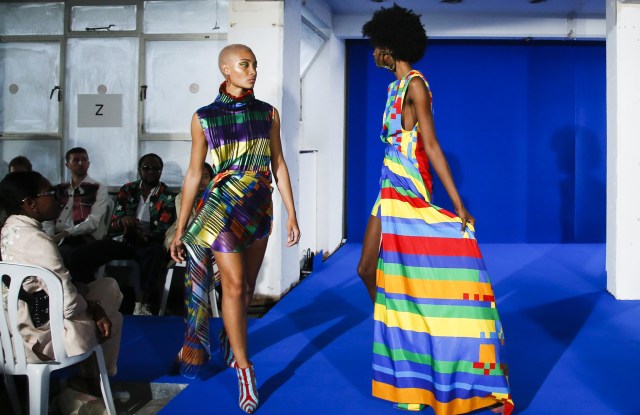 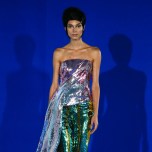 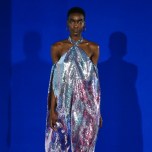 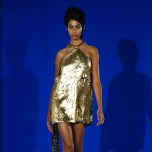 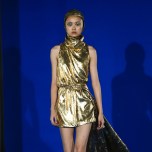 Michael Halpern flexed his versatility for spring 2019, showing that there’s more to his schtick than just sparkles — though, gratefully, there were still plenty of those.

Now in his fifth season on the London schedule, Halpern’s high-octane collections have been heartily embraced by retailers, like Browns and Bergdorf Goodman.

Hitherto, he has mined the Seventies and the hedonism of the disco era. For next season, he looked to the Sixties in a tribute to his grandmother and the pioneering women of her generation.

“I never met my maternal grandmother so the stories I heard about her came secondhand through my mom,” Halpern told WWD. “Hearing about the women in the Sixties who set up my mom’s generation with the pill, minis and women’s rights that enabled them to be able to rebel so hard in the Seventies.”

There were parallels to the avant-garde stylings of Courrèges in the provocative circular cutouts that offered glimpses of hip bones, in one look doubling as pockets out of which flowed a garland of black organza that morphed into a train. Pierre Cardin’s influence could be seen in the skin-tight hoods sported under tunic dresses and the bold stripes and checks throughout.

Throwing the focus from sequins to a general notion of shine, Halpern deployed patent leather in a cropped baby pink jacket and a red miniskirt, draped to fall in a single architectural cascade. A series of gold-foiled georgette halter dresses showed a lovely fluidity, while a flouncy sky blue organza halter minidress had a poufy flounce on the shoulder that flowed to a floor-sweeping train.

A blue and acid yellow rainforest motif that was printed on denim felt a little unsophisticated by comparison.

But this is a label rooted in unapologetically glamorous escapism — and there was still plenty of that. Sequined flares with contrasting patterns on either leg looked languid despite the bling when paired with either a draped funnel-neck top or a boxy red and blue sequined T-shirt.