The Chinese designer collaborated with artist Vivien Zhang on the print. 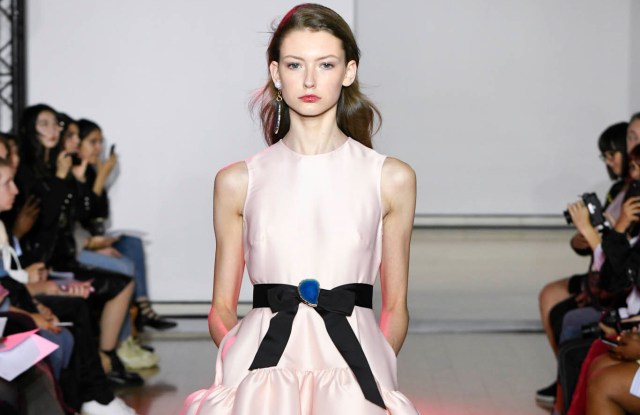 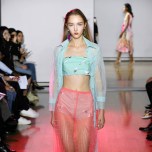 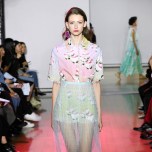 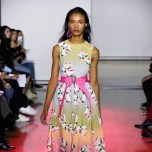 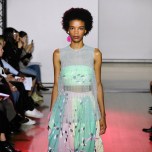 Huishan Zhang’s brand of refined femininity has always given a nod to bygone eras or paid homage to stylized movies by auteurs. His sense of romance imbues a sense of dreaminess even when interpreting its darker tones. This season, Zhang looked to the future and took the Reuleaux triangle as his starting point.

“They used this triangular form for space travel a lot and the colors draw from the light that’s coming through,” the designer said.

The Reuleaux triangle is formed when three circles intersect and the shape was seen throughout the collection as cutouts on the backs of dresses, delicately pleated on the neckline, and quilted into feathered shift dresses.

“The silhouette is very Nineties and minimal but we injected it with really exciting colors,” he explained.

The collection opened with a series of fresh pastels in mint, yellow and periwinkle separates overlaid with tulle, followed by darker navy and black suits in satin and hand-embellished with pearl detailing. Zhang closed the show with a series of blush-toned satin gowns featuring exaggerated peplums and fluid ruffles that cascaded down the body.

Several of the pieces were cut on one piece of fabric. Zhang and his atelier in China draped one piece of square fabric around the body and tailored around it and when laid flat, the dress will keep its shape.

“The whole idea is that we transformed it from two-dimensional to three-dimensional and that’s why we had this idea of building everything from a piece of fabric and have literally only one seam at the back of the garment,” he said.

This season also saw Zhang introduce print into the collection. He collaborated with his friend and artist Vivien Zhang, whose work has been exhibited in Beijing’s Long March Space, for the abstract, petal-like prints this season.