For her 10-year anniversary show, Mary Katrantzou mixed up the language she's developed over the past decade, and translated it into a fresh set of designs. 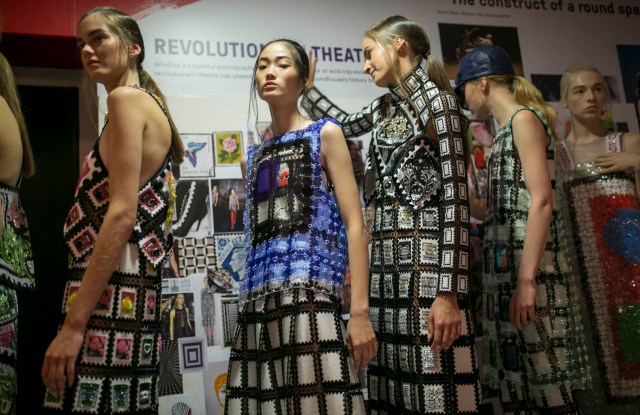 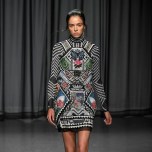 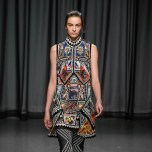 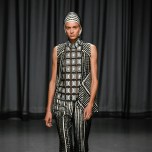 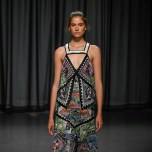 For her 10-year anniversary show, Mary Katrantzou didn’t hold back. She booked The Roundhouse, the vast concert and performance venue in Camden, got the Academy Award-winning Greek composer Vangelis to compose a soundtrack for the show, and worked with Stephen Jones and Jimmy Choo.

Despite the milestone, Katrantzou was determined not to look back. (Earlier this year, she staged a retrospective, “Mary, Queen of Prints,” at Dallas Contemporary with 180 pieces from the archive.) Instead, she wanted to mix up the language she’s developed over the past decade and translate it into a fresh set of designs.

She also looked at the idea of collecting and creating pattern, and worked some familiar motifs such as perfume bottles, insects, cards and stamps into new shapes, textures and embellishments.

“The theme of this collection was collecting,” said Katrantzou, adding that nothing from her archive was referenced directly. Instead “we mapped out our favorite silhouettes and techniques and looked at our most recognizable prints and images. We cross-pollinated them, and mixed them up.”

The result was a collection of some fantastic pieces, including a shiny, bulbous blouse meant to look like a piece of blown glass, and clattering plastic chainmail-like overlays on dresses. See-through plastic stoles were filled with bits of coral and shells or dried flowers while stiff, curving minidresses were adorned with rows of ring boxes.

Among the strongest pieces was a shimmery floor-length gown with a perfume bottle picked out in sequins down the front, and lineup of colored, sparkling postage stamp minidresses. Flowing nylon dresses were printed with famous works of art, one of them adorned with sticky tape that read “Fragile.”

It was fun — though at times unwieldy — and much of the clothes’ colorful, intricate detail was lost in the vast venue, with guests sitting too far away from the models.

Consumers will get another chance to relish her prints, patterns and textures in early October when Matchesfashion.com unveils 10 reissued archival designs, which will be sold as limited editions.