Ahead of the brand's 50th anniversary next year, the veteran designer presented a collection that mined her vast archive of prints. 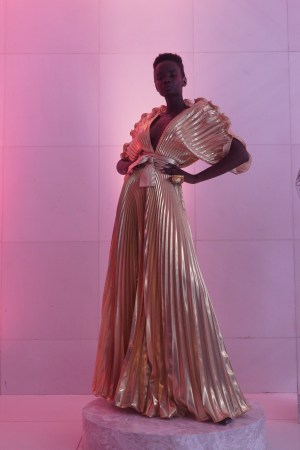 The last time Zandra Rhodes was on the London Fashion Week schedule was in February 2016 for the fall 2016 shows. But, then, when you have been in the fashion business for almost 50 years, and you’re Zandra Rhodes, you can come and go as you please.

Next year will mark the 50th anniversary of the House of Zandra Rhodes. Ahead of that landmark, the designer presented a collection that mined her vast archive of prints, incorporating them into screen-printed chiffon dresses and jumpsuits that had a retro feel but were fun and fresh nonetheless.

“That’s the cactus print resurrected from 1975 when I went across America in a Volkswagen camper and drove past all the saguaro cacti on the way from Texas into California,” Rhodes said at the presentation, gesturing to a roomy one-shouldered chiffon dress in palest blue, held up by a pearl-trimmed band. “And that’s the print from Mexico,” she added, pointing out a floaty red halter dress and a long blue gown printed with stylized Aztec shapes.

The shapes also referenced Rhodes’ most recognizable designs, like the long blue off-the-shoulder dress with a zig-zag ruffle that echoed the pink dress that Diana, Princess of Wales wore in 1986 at a state banquet in Kyoto, Japan.

The most eye-catching looks were those in sunray pleated lamé. A strapless copper jumpsuit had little ruffles that swirled around the bodice, while a short, belted silver dress and a long gold gown with a deep plunging neckline were glamorous entrance-makers.