Puglisi obsessed over the work of Stephen Burrows, Halston and Alaia and molded it into his own nouveau power woman wardrobe. 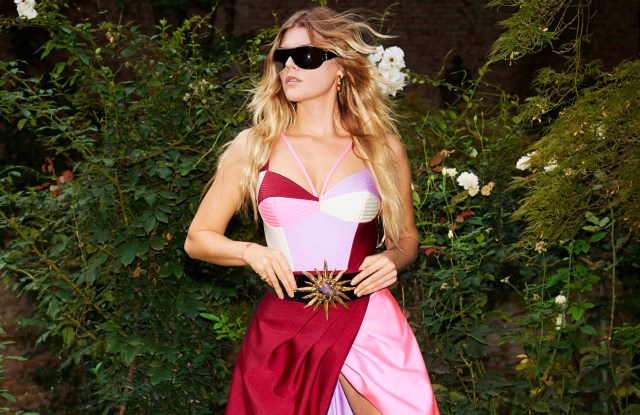 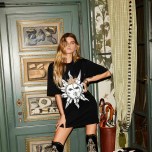 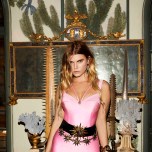 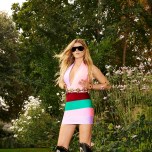 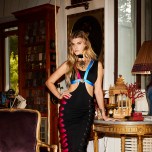 There is no question that Fausto Puglisi is Italian to his core, but one of his ongoing obsessions is America. The culture, the women and their sense of independence and fun have informed his work from the beginning and continued to do so for spring. Puglisi homed in on some of his favorite designers from the Seventies, namely Stephen Burrows and Halston, taking their sense of color and sexy sportiness and molding into his va-voom maximalist sensibility. “I’m not saying this is ‘the new Halston’ or ‘the new Stephen Burrows,’” Puglisi said during his presentation at Larusmiani. “It’s just Fausto thinking about the things that shocked my mind as a kid.”

In addition to Burrows’ color-blocked intarsias, worked into bustier bodysuits worn with stretch jersey long-on-one-side, mini-on-the-other skirts, and Halston’s slinky jersey, reimagined as a tank dress and more bodysuits, Puglisi paid homage to Azzedine Alaïa. Specifically, Grace Jones in the famous lace-up, purple hooded dress, which inspired a scant mini and mid-length dress, both painted on the body with wide-open lacework up the side. Nothing in the collection was for a wallflower. Nothing ever is. Puglisi’s clothes are for women who’ve got it, know it and are proud to flaunt it. There’s something fabulous about the way he commands elements that have all the makings of a tacky disaster into a look that, at times garish, is resplendent with female power. That’s called owning it.