Christian Cowan mixed shimmer and drama into a dynamic ready-to-wear collection for spring. 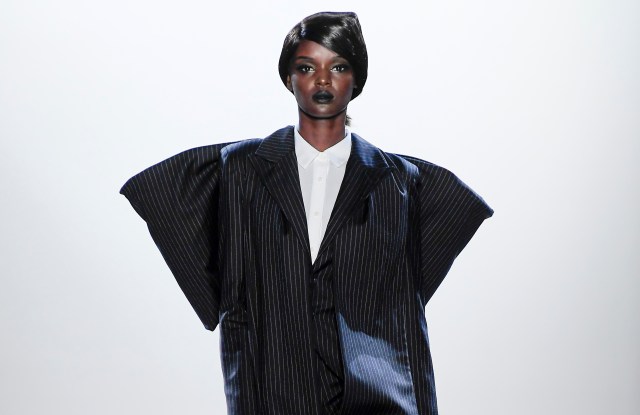 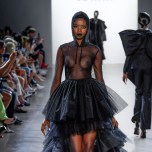 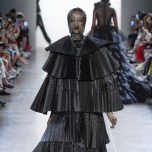 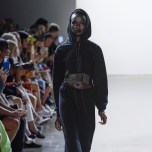 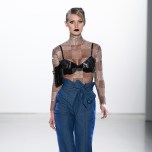 “I was really inspired by the women who have supported me since day one,” Christian Cowan said backstage after his spring show. His designs directly reflected each of these women: for his mother, there was a baby blue power suit; for his best friends, crystal mesh dresses; for Cardi B and Lady Gaga (the first to wear his designs), his opening pin-striped suit with an oversized bow or the rhinestone-adorned bodysuit with oversized, checkered poufed sleeves with lilac bows and a rhinestone face mask.

The second overarching idea behind Cowan’s collection was the ability to cater to the masses — or rather, the fans of the various celebrities he dresses. Cowan called it his inclusion, rather than diffusion, line, which included oversized logo T-shirts and athletic T-shirt dresses that meshed with his updated cropped and bedazzled sweatsuits, paillette-covered hoodies and playful minidresses.

The designer also debuted his first collaborations of shimmering and feather-adorned shoes with Giuseppe Zanotti and triple-layer baseball hats with Eugenia Kim. Cowan even poked fun at an unnamed designer, who had recently claimed to originate the straw hat, by turning Kim’s oversized version into a two-piece miniskirt set, which the whole audience, including Christina Aguilera and Troye Sivan, flipped their phones up to capture.

Clothes that would make women feel dynamic and fun? Check. Ones that are also forward-thinking and business-savvy? Double check.