Niall Sloan channeled the brand’s amusing beginning and archives into a collection underscored by ease. 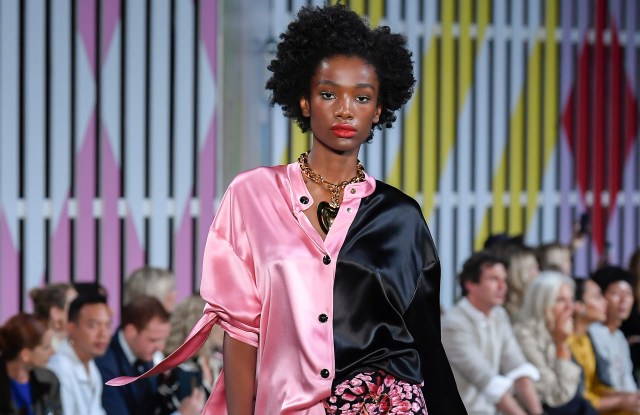 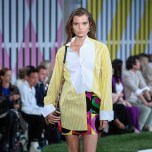 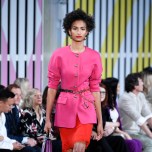 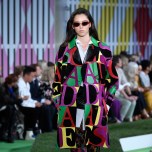 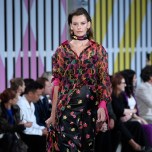 Sloan has used the last two collections as a testing ground for his vision of the modern Escada woman, injecting bold color and reviving archival logo prints, all with an Eighties bent that has modern appeal. Silhouettes have softened, and the attitude has become more carefree.

For spring, Sloan channeled the brand’s amusing beginnings and archives into clothes underscored by ease. For those who don’t know, Margaretha and Wolfgang Ley named the brand after a racehorse they admired for its energetic spirit. That sense of frivolity came through in the loose silhouettes of oversized shirting — including a crisp poplin over a graphic logo skirt, a silky blue number over equally languid red pants, or a color-blocked pink-and-black version styled with an animal-print burnout velvet skirt — a new take on evening at once elegant and unrestrained. Sloan had fun with the athletic stripes on a mini bomber jacket, and polka dots both graphic (red-spotted pants) and refined (neutrals in waist-defining dresses and skirt suits).

He has been careful not to ignore the minimalist inclinations of business types while extending the range to a younger clientele. Power suiting came through in saturated colors taken from the archival logo print, oftentimes in tonal looks juxtaposing the structure of a jacket with a softer fabric underneath, showing there can be a blend of strength and fluidity. Younger fans will enjoy a Nineties-style plaid suit worn under a semisheer raincoat that nodded to Sloan’s time at Hunter. Many of the suits were topped off by vintage-inspired gold chain belts with Escada letters.

“It’s just about being easy,” Sloan said after the show. “I think women’s lives are difficult today and I feel privileged to be able to kind of say, ‘I can put this wardrobe in front of you and you can take what you want and put it on and forget about it for the rest of the day.’”