Ronnie Fieg capitalized on collaborations — from Tommy Hilfiger and Ugg to Greg Lauren and Versace — for his Kith Park spring show.

IsSixWeeksAfterFashionWeek = false
By Emily Mercer and Aria Hughes on September 7, 2018 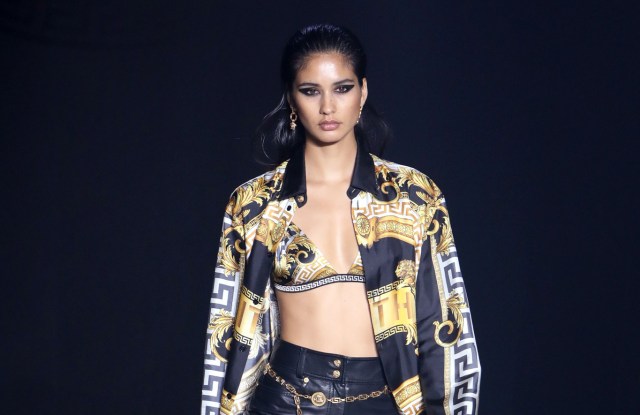 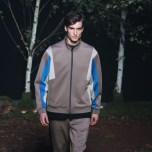 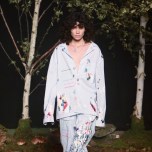 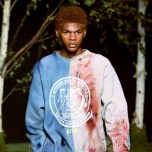 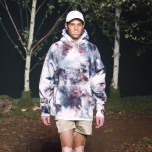 Over the past three years, Ronnie Fieg has built a blueprint for his fashion shows, which involve a series of capsules showcasing his multiple brand collaborations that are broken up with performances, videos or surprise appearances from the likes of Scottie Pippen and LeBron James. This time, James sat in the front row along with Justin Bieber, 2 Chainz, Fabolous and “Foodgōd” Jonathan Cheban, and things were more streamlined and cinematic. The show started with a fall setting — at one point it started to snow — and models wore items from Fieg’s own line that included more tailored pieces, mostly coats, along with plaids and tartans that showed up on jogger pants and hoodies as well as logo-embroidered denim and cropped sweatsuits for women. Collaborations with MISBHV, Advisory Board Crystals, Eastpak and Ugg also made their debut.

The bleachers then moved across the floor to the next scene, a library setting serving as the backdrop for his collaboration with Tommy Hilfiger, which was a logo-heavy assortment playing on the styles Hilfiger made popular in the Nineties. Hailey Baldwin opened that lineup as Bieber offered a thumbs-up from the audience, and Hilfiger made a brief appearance before the bleachers slid over to Kith’s collaboration with Greg Lauren. It featured repurposed rugby shirts with the Kith logo, flannels and shorts, hybrid workwear and fishermen sweaters.

Last up was Fieg’s latest luxury partnership with Versace, which was opened by Bella Hadid. For women, prints emblazoned trendy streetwear staples: bike shorts, cropped puffer jackets, bodysuits and tracksuits. Highlights from the men’s included velvet puffer coats and jackets covered in Versace’s signature baroque prints and a faux fur camel-colored jacket with alternating Kith and Versace graphics. Fieg obviously still offers something valuable for larger brands looking to reach a younger audience, and he’s been consistent with his message.