Yes, LaQuan Smith brought the sexy for his spring collection, but he also revealed a more sensual and playful side. 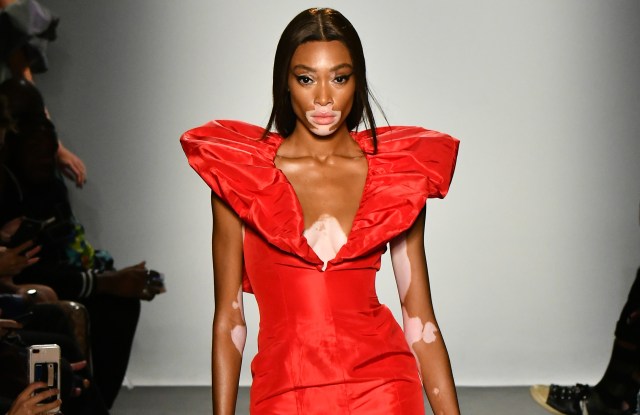 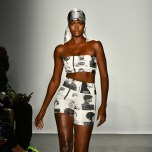 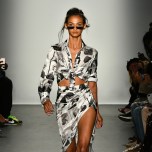 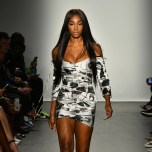 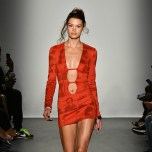 “I wanted to do something different this season — I was inspired by women who commit crimes and I wanted to sensationalize that idea,” LaQuan Smith said coyly backstage before his show. “I thought, ‘What would she wear while she is on the go committing her crimes all out of fun?’”

But once the lights came up and model Duckie Thot opened the show, the reference was crystal clear as four looks with a black-and-white print of women’s mugshots came down the runway. It was a wink-wink to the theme, and looked especially fresh on the opening cowl neck gown.

Sexy is something you know you’ll get at a LaQuan Smith show, and he delivered — with the purple neon lace bodysuits and the lace biker shorts and bustier combination— but for Smith’s spring outing, the sexy was elevated from overt to more sensual and playful. A section of body-con looks in an iridescent black fabric with hints of red shine had a James Bond villain or mob doll vibe…fitting for Smith’s bad girl on the go.

His fabrics this season also played to that theme, using 3-D crystal embellishment on jackets and gowns, and head-to-toe sequins on suiting.

Smith is widening his net by getting in the collaboration lane, showing belt bags and luggage, a collaboration with streetwear brand Sprayground, and previewing a few pieces of denim and some sci-fi sunglasses from his Oct. 27 launch with Asos.

“There is some accessibility there,” he said. “It’s for women who aspire to wear LaQuan.”