Lopez cleansed his palette of color and cited Dante’s “Purgatory” for a mix of street and renaissance, which he aptly calls “thot-aissance". 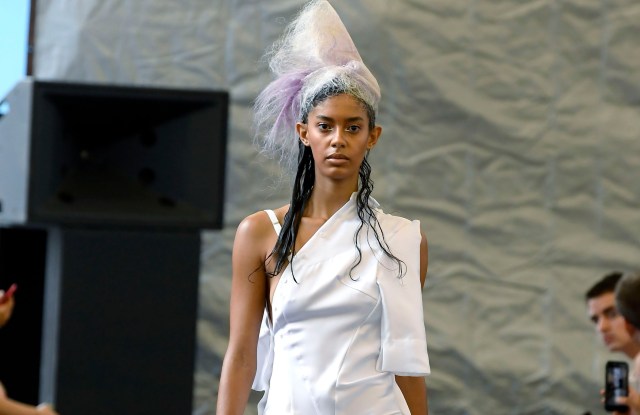 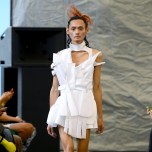 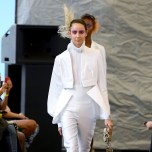 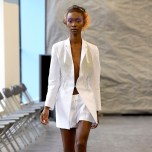 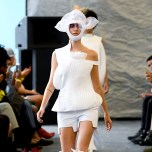 Luar’s Raul Lopez is a finalist in this year’s CFDA/Vogue Fashion Fund competition. Of all the designers, his aesthetic leans the most heavily on the deconstructed and experimental side of fashion. Many of his past looks have skewed too avant-garde for everyday wear, so he used his latest collection to communicate that he can deliver on refinement and streamline his brand of distortion.

“I wanted to show my progression and how I’m growing in the brand and not just staying in the same thing,” he said post show, adding, “But keeping my element.”

He cleansed his palette of color and cited Dante’s “Purgatory” for a mix of street and Renaissance, which he aptly calls “thot-aissance.” “I feel like we’re all fighting this battle right now in society and all trying to make it to the top and to heaven,” he continued.

He twisted, gathered, draped and deconstructed familiar house codes with finesse, injecting an ethereal thread to his typically mannish silhouettes. He let pleats curve half the body with a pieced-together top, cut jackets big and flowy, and delivered some wearable items: pants that unzipped at the cuffs, a sheer crinkled dress styled with pleated leggings, a jacket that was proper in the front featuring multiple zippers in the back, and variations on tailored jackets that mixed skin-baring elements with structure.

He played with gender norms by styling men in sheer tops, dresses and skirts. “The woman is going to go to the man’s closet and take his dress and wear it to work,” Lopez emphasized, adding: “That’s when it’s fluid.” It all culminated with a hand-painted dress by an artisan in Mexico who does cathedrals, which Lopez made his own by embroidering with gold and silver thread.

Of his CVFF journey, he had this emotional statement to offer: “It gives me affirmation as a kid being born and raised in New York and really letting me say my story. I didn’t go to fashion school, I couldn’t afford it. To me this was like me going through graduation and getting recognition for all the hard work I’ve put in because I’m doing this all by myself.”