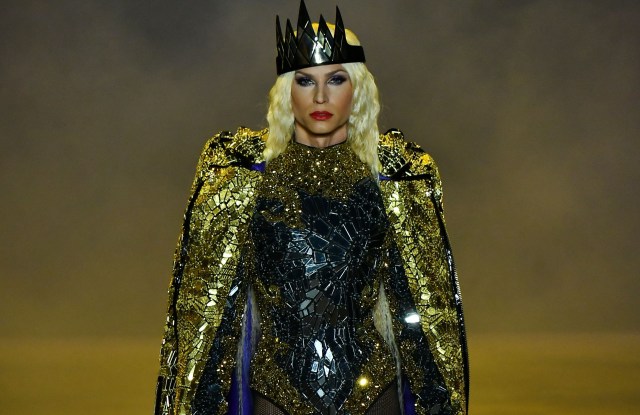 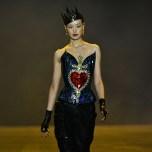 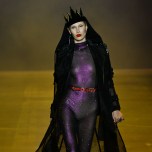 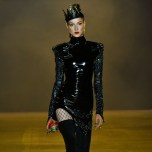 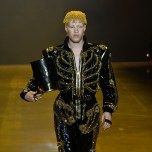 It’s 10 p.m. on Friday night at fashion week and who do you want to hang out with? The Blonds, co-founded by designer Phillipe Blond and creative director David Blond, would be a solid pick. Their spring-summer outing, a collaboration with Disney’s Villains, made for a smart mashup for the brand’s showgirl glam aesthetic.

The show felt more like a concert than a fashion show as the crowd clapped and yelled at each character that came down the runway, and that isn’t a bad thing. Phillipe Blond, as the Queen of Hearts, opened the show to a chorus of screams from the audience, walking in a mirror mosaic bodysuit and a flowing cape with a bedazzled bright-red heart on the back that might look great on any number of the brand’s high-wattage clients. (Beyoncé and J.Lo come to mind.) Ursula the Sea Witch strutted down the runway in a floor-length bustier dress with plumes of different hues of purple feathers, but there were also a few smart-casual — by Blond standards— pieces, like a Maleficent leather moto jacket, which was collaboration between The Blondes, Disney and designer Lauren Moshi.

The runway was like a party with several of the cast members of Ryan Murphy’s “Pose” serving and death dropping on the runway in full villain regalia. And in a meta moment, Paris Hilton played Cruella de Vil in a fitted sequined asymmetrical hemmed dress, complete with dog as accessory.

Some may say the runway show is outdated, but for a brand like The Blonds, it still serves as a way to celebrate their clothing with all their friends. And at 10 p.m. on a Friday, who doesn’t want to see some Disney villains work a runway?