High school stereotypes were twisted through the Vaquera looking glass so that the freaks and geeks ruled the school. 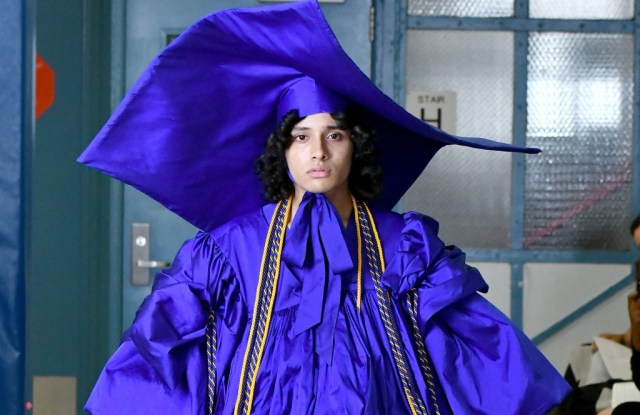 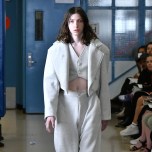 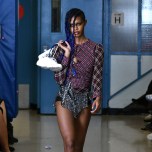 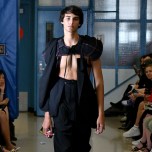 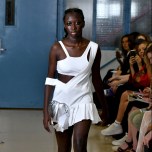 Vaquera’s spring show was like a fun little pop quiz that the whole class already knew all the answers to — no head-scratchers here. Patric DiCaprio, Bryn Taubensee and Claire Sully showed at P.S. 42 Benjamin Altman on Manhattan’s Lower East Side, the runway winding through cafeteria tables littered with bubblegum, spilled Coke cans and wadded-up loose leaf paper. The “Harry Potter” theme song set up a procession of high-school stereotypes — jocks, sluts, cheerleaders, goths — that twisted through the Vaquera looking glass so that freaks and geeks ruled the school. Is subversion still subversive when the concept has gone so mainstream?

The prom king wore pumps with a literal sweatsuit, a tux made from gray fleece. The cheerleader looked like she had spent the night at a rager in her bra top and tattered mini dress. Football pads were reimagined as a cute denim harness; your little brother’s sports bedsheets were transformed into a voluminous gown, and those finicky Scantrons became a print on a pair of pants.

A footnote on Vaquera’s shownotes defined the label as “a unisex clothing line that redefines luxury fashion through narrative-based collections.” The story they were telling was clear, though it stands to note that making a collection out of thematic walking punchlines felt a little bit like looking over Jeremy Scott’s shoulder during a final. Still, the finale of a senior-portrait-ready cap-and-gown ball gown was a hoot. As for redefining luxury — consult Merriam-Webster. The collection was pure scrappy DIY, and you could definitely try this at home.