Cream and burgundy linens were obtained by dipping the fabric in red and white wine, as part of the brand's exploration of natural dyeing techniques. 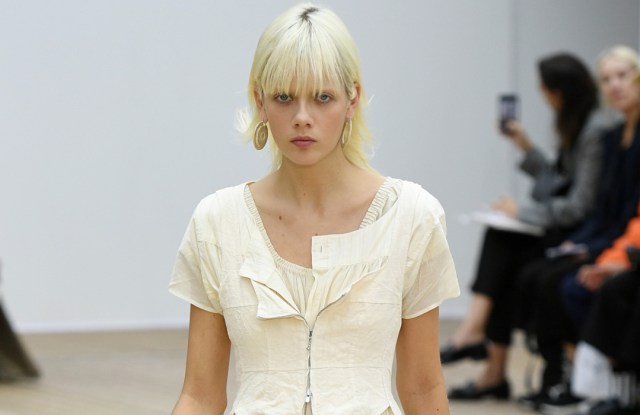 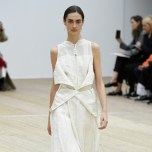 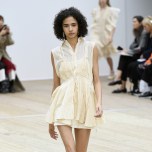 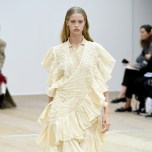 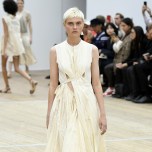 After Chanel’s beach extravaganza, guests remarked that the venue for the Beautiful People show looked a bit stark in comparison. All the best to keep the audience’s attention on the complicated construction of the garments themselves. In the last part of the show, members of the studio had to actually come on to the runway to assemble four silhouettes, confirming the theme of the collection, “Puzzles.” The team demonstrated how bunched-up waists and dangling threads could be pieced together to form a less deconstructed look.

Designer Hidenori Kumakiri managed to break linen into eveningwear. Proof that natural fabrics don’t have to be limited to leisurewear, linens were delivered in an elegant spread of pleated cream and rich burgundy. The designer revealed backstage that the hues were created by dipping fabrics in red and white wine, which also added texture. The process is part of the brand’s experimentation with natural dyeing; deep blacks were achieved thanks to bamboo coal.

Pops of lime and gray-blue prevented the collection from feeling too earthy. Jackets appeared shrunken, because they actually were: Their original XXL size became fitted once immersed in salt water.

Prints were discreet — small checks and stripes in blue and mauve — and skirts were tied at the front, putting the focus on waistlines. The collection mirrored the Japanese designer’s continued exploration of clever garment construction, and was definitely food for thought.