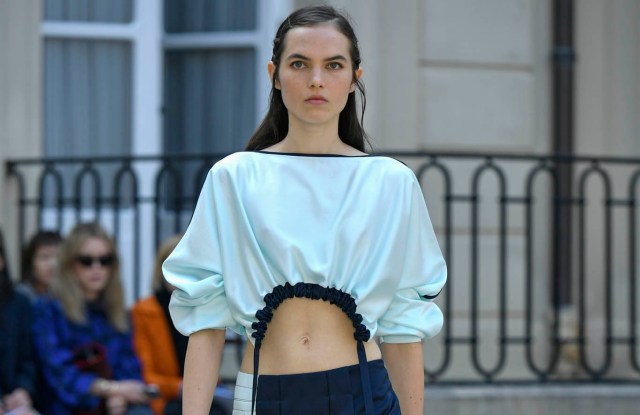 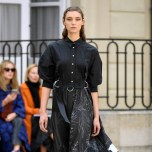 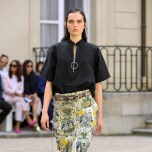 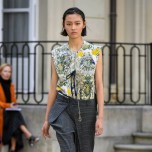 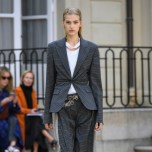 Cédric Charlier took advantage of the French capital’s Indian summer to stage his show in the courtyard of the Belgian ambassador’s residence in Paris — though the space was missing the lush vegetation on his show invitation.

Instead, the greenery sprouted on a puff-sleeved zippered jacket, or kick-flared cropped pants, in an embroidered jacquard that melded a 19th-century parrot and pineapple print with tufts of yellow beads and hand-drawn odalisques. The baroque combination was born in Naples, where he designed the collection.

“It’s a country I like to visit for work and for pleasure,” said Charlier, whose collections are produced by the Italian fashion group Aeffe. “I wanted to talk about Italy, about what I felt, also about the Renaissance.”

Hence the smocked tunic and oversize striped shirts with puckered sleeves, though their historical connotation was not immediately evident. Archeological references translated into a graphic line print that appeared on everything from a sensually draped sundress to a mannish short-sleeved shirt.

Charlier brought his androgynous leanings into the mix via workwear accents, such as the hickory-striped cotton used for a terrific dress that zipped open to reveal an Adonis-print silk underskirt. The suit shapes were less convincing, with their Chaplin-esque combination of shrunken jackets and hyper-baggy pants.

Italian, Belgian, French: Ultimately, it didn’t matter where the collection came from. These clever and wearable clothes had universal appeal.