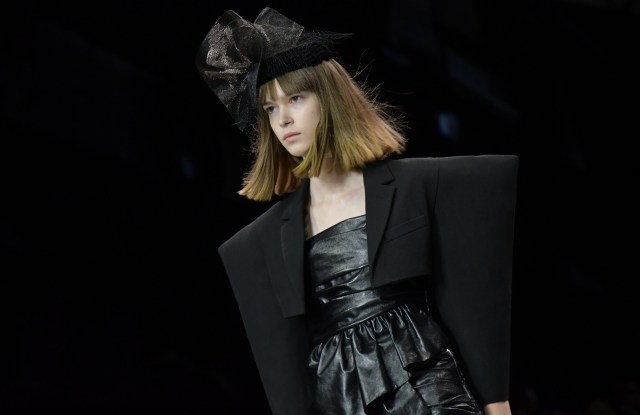 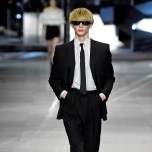 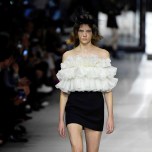 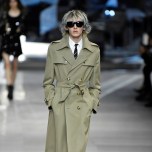 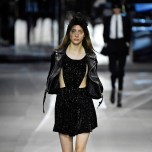 As presented, the onset of that day played as more of a new night, because Hedi Slimane focused on after dark. He titled his show “Paris La Nuit,” and wrote in his program notes simply, “Journal Nocturne de la Jeunesse Parisienne.”

Telling words indeed. There is virtually no connective tissue between Slimane’s aesthetic and that of his predecessor, Phoebe Philo, a reality on flagrant display throughout the show: Out with Philo’s powerful woman-to-woman runway messaging that connected so intimately with her client base; in with Slimane’s social-friendly, primacy-of-youth focus.

Though perhaps curious given today’s cultural climate, the seismic change was not at all unexpected considering Slimane’s very specific visual résumé. His Celine is the sister and brother (lots of men’s wear) of his Saint Laurent. Only, here, he focused on the more wholesome siblings — the models didn’t look strung out. These girls love la nuit, their primary staple a party dress, mostly of the LBD ilk, though with intense color here and there. The dresses were very short and would-be sexy (a change of shoe; a flick of mascara), often retro with a flourish — sparkles, a cutout, a fancy sleeve, the giant, bow-like bodice that opened the show. (A million years ago, WWD called the genre cocktail shakers.) Slimane integrated enough day clothes to let you know they’re there, particularly jackets — bombers and cropped smokings — shown over the dresses or with pants. Many of the models wore little veiled cocktail hats in insouciant opposition to their tough-girl motorcycle boots. The guys (and some girls) wore good-looking, skinny retro rock-star suits, not unlike those on which Slimane first skyrocketed to fame at Dior Homme. Many looks referenced Saint Laurent, both the original deity and Slimane’s tenure at the brand. If there were surprises, they came in the rejection of street and a black-and-white striped coat that appeared to be real mink.

Overall, the highly anticipated fashion felt familiar, everything well within Slimane’s known parameters. Slimane-o-philes may pant; Phoebe-philes may rant; others will continue to wonder at Slimane’s ongoing fascination factor.

So no shockers, but some definite takeaways. Commercially, Slimane transferred his Saint Laurent M.O. here: young, edgy runway vibe highlighting the classifications that will be available for purchase — pants, jackets, coats, handbags, which should have appeal beyond jeunesse, as will some of the dresses, if the merchandisers add a little length. Second, the stage is set for a Celine-Saint Laurent rivalry, with both brands now operating in similar aesthetic wheelhouses. For those who enjoy a blood sport, it should be fun to watch.

More broadly, the total personality makeover of Celine calls into question assumptions about the importance of brand identity, at least as perceived within the world’s largest luxury group. Slimane’s hiring at Celine indicates that today, even a successful brand identity, one embraced with passion by a significant consumer base, plays second fiddle to potential buzz. True, Philo’s particular connection to her customer was distinct, idiosyncratic even, and would have proven a weighty mantle for any incoming designer who sought to follow her philosophy. Conversely, Slimane’s cards were on the table, a hand antithetical to Philo’s. He is both designer and hypemeister/social media sensation, a combination LVMH deemed irresistible, even if it meant alienating the clients who found something special, more than just great clothes, in Celine’s prior incarnation. In Philo’s intensely pro-women approach to fashion they also found emotional and psychological affirmation.

It’s too pat to say that Philo’s faithful will now exit Celine en masse; many women have room in their closets for both highly considered, solution-based pieces and a good leather jacket. Those don’t necessarily come from the same place, and few women, no matter how dedicated, are one-brand-only customers. It’s also too easy, especially today, to politicize fashion. A feminist can wear a sexy dress. That said, it’s inevitable that the woman who perceived Philo’s Celine as a go-to source will read the writing; she knows that she’s no longer the brand’s primary target and will be looking elsewhere. Within LVMH, Jonathan Anderson’s Loewe offers promise, and outside that empire, Stella McCartney takes a different approach to pragmatic, positive thinking translated into clothes.

As for Celine, Slimane deftly translates a cool runway attitude into approachable clothes that perform at retail. At Saint Laurent, he managed to maintain both hype and commercial success while working a limited range of motion. Whether he can do it again remains to be seen. It sure worked at Saint Laurent.