The collection oscillated between crazy club gear telegraphing the cool kids of the Berlin scene that the designer is part of and tamer items. 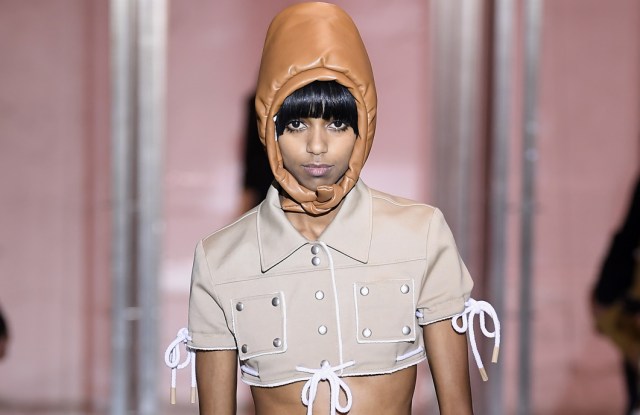 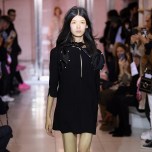 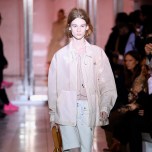 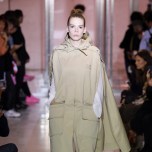 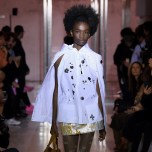 Space-Age fashion. Is it still relevant today? And can we have a future if we don’t take care of our present?

Those were some questions pondered by Yolanda Zobel for her debut collection for the house, titled “The Future Is Behind You.” After all, in a world drowning in plastic waste, sorting out planet Earth is more of a preoccupation for the youth of today.

It’s all part of the repurposing vision for the brand’s reboot.

The textured vinyl synonymous with Courrèges was the starting point for the collection, but more the decaying state of materials lying in the house archives, which the designer sought to re-create in materials dappled with shine. “I want to take people with me in what it feels like to come inside a treasure box like this,” said the designer, who has pledged to discontinue its production while investing brand profits in developing an alternative material for the future. Instead for her “post-plastic” collection, the focus was more on natural-looking fabrics like unwashed, non-dyed cotton.

The collection oscillated between crazy club gear telegraphing the cool kids of the Berlin scene that the designer is part of, with tamer items like capes and anoraks. Highlights included a beige trench in a hard-drilled masculine cotton, asymmetric ribbed knits and shorts with bright vinyl accents. She mixed in second-skin undergarments including Sixties-esque bodies with signature geometric metallic shapes.

Combining men’s and women’s looks, the collection also had an androgynous feel to it, though the overall vibe was more mix-and-match. Outerwear was the strongest element, especially the transformable black coats with popper details and flap patch pockets.

Also on display was the logo reworked by Peter Saville.

For the industrial, clublike show space, the brand had gutted the flagship on Rue François 1er — “the epicenter of the house” — bringing in multidisciplinary studio Diplomates to occupy the space for the four days leading up to the show. Models walked across a glass-and-metal bridge in the courtyard connected to one of the store’s glass windows.

Another kind of countdown was taking place in a pop-up show next door with numbered products made from 6,000 meters of vinyl stock on sale until the material runs out.

As for the iconic Courrèges vinyl jacket and Sixties dresses, Zobel flipped them inside out and revisited them in undyed raw cotton with accent panels of fluorescent pink or orange vinyl.

For her, it was more about channeling the unique spirit associated with the house, the mix of pop energy and functionality. Not forgetting this sense of sporty optimism associated with house founder André Courrèges. “This naïve beautiful feeling of the first sportswear jacket of the 20th century.”

It’s still a work in progress for Zobel, whose collection lacked the graphic purity Courrèges is known for. But based on this first effort, for now the future of the brand, as it enters an era under new owner Artémis, the family holding company of the French billionaire businessman François Pinault, looks bright.