To complete Gucci's celebration of France, Alessandro Michele was inspired by two stars of Italian experimental theater. No one ever said he's linear thinker. 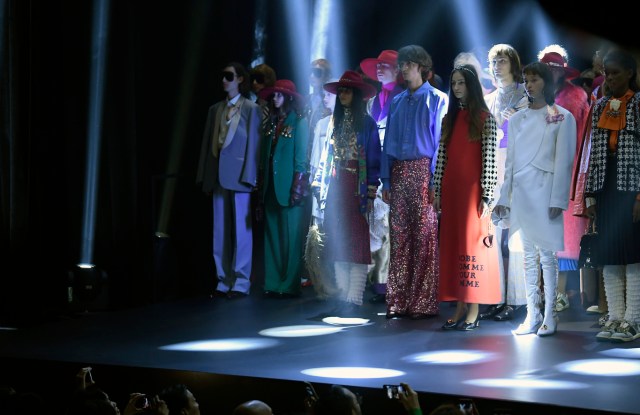 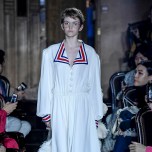 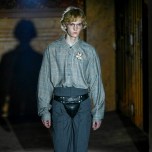 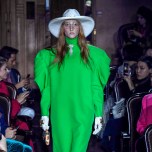 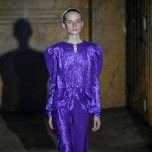 Do you ever long for the good old days in fashion? You know, when all a girl and boy had to do to get attention was carry their own heads in their hands? Life is more complicated now. Now, they create their own experimental theater, inspired by a grainy, creepy-chic silent film by Seventies’ experimental theater impresarios Leo de Berardinis and Perla Peragallo, about a girl with black eyes (smudged or punched?) who looks like a Gucci girl on a bad acid trip, and who freshens up with a splash of urinal water. Thus inspired, they create their own performance-art world populated by the likes of Janis Joplin and a boy in a jeweled cod piece. They dress with wanton disregard for convention, some geek-chic-faux-plain, others, as if they got dressed in the dark in a crazy-ass vintage store that just received a costume shipment from waaaay off Broadway, spliced with Goodwill items chosen for their ironic potential. And then this girl and boy throw a party for like-minded types, and Jane Birkin wanders into the middle of it and sings like an angel with a past. And, oh yes, there’s Mickey Mouse (as a handbag) and Dolly Parton (on denim).

Alessandro Michele has done something remarkable at the Florentine house. In an instant, he made us all care again with something wild and outrageous and completely antithetical to the Gucci we first loved and to the Gucci that had settled into prosaic merchiness. Through several years, Michele has maintained the heady magic with a dizzying fusion of informed, referential, experimental, highly decorative fashion and street, rooted in a genuinely artistic vision and delivered with fearless assurance. While seemingly random and insane, it is in fact brilliantly — and tactically — planned. In his post-show press conference on Monday, Michele talked about his discovery of de Berardinis and Peragallo (“they changed the rules of traditional theater”); the honor of having Birkin perform (she’s “a poet, like a Middle Ages troubadour”); and why he showed at a theater, Le Palace, “(a magic place where you get in, and something happens”). He found the history-rich venue, a one-time famous nightclub, the right place to “reconnect high culture and popular culture,” and that it would be “nice to reactivate the underground scene.”

But with sales upward of six billion euros, Gucci is way above sea level. It just is. To suggest that it can inaugurate a genuine underground (if such were even possible anymore) is to ignore the basic reality of a mainstream luxury behemoth owned by a bigger mainstream luxury behemoth. Deep down, Michele knows that; at the press conference, he even worked in a couple of specifics about the clothes: “I was really obsessed with tailleur, blazers and suits,” and, “I really take care of the shoulders.” In a world in which blazers, suits and shoulders matter, Michele has dared to reimagine Gucci as a cool enclave for eccentric outsider types, the more offbeat, the better, with remarkable success. He has imbued powerhouse Gucci with niche cachet, making it both spectacular fashion curiosity and spectacular commercial juggernaut.

Yet it is now spinning toward self-parody. Truth is, it may already be there, but the trip has been incredibly inviting, fun to watch, and filled with great clothes, so who cares? So far, so great. But when the frenzy calms, and it can’t last forever, Michele will have to evolve and more tightly focus his baseline of merry misfit mayhem. More isn’t always more.