It’s been a good long while since Watanabe cast his singular eye on denim for the majority of a collection. 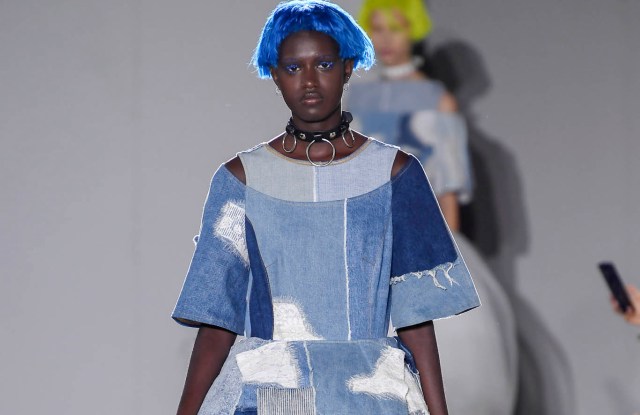 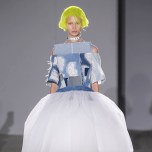 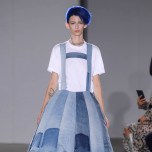 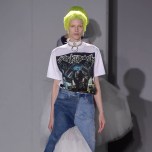 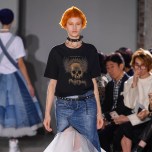 No, that is not petulant sarcasm. The sight of blue jeans — one of the most mundane, everyday, everywhere fabrics in modern fashion — stirred genuine feelings of fashion euphoria as the opening of Junya Watanabe’s spring show. Queen’s “Bohemian Rhapsody” on the soundtrack helped, but that aside, it’s been a good long while since Watanabe cast his singular eye on denim for the majority of a collection. Go back and look at fall 2013 and spring 2011. When he cuts jeans, his brings his brilliance in cut and deconstruction to the people — not all people, but his people — with clothes built from a place of warm familiarity, even as Watanabe performs high-concept, reconstructive surgery on them. They have a place in this world. It’s not dumbing down. It’s luxury.

Now, it stands to argue that the fit-and-flare dress made from squares of faded indigo denim dissected, shredded and reassembled in a patchwork of conductor stripes and white lace, its full skirt lined in fluffy white tulle, is not for doing the dishes. But it made Watanabe’s point from the get-go: “to express the romantic feeling in rock,” according to a brief, explanatory e-mail from the house. The lineup was pretty in punk, a genre he’s been turning over again and again from all angles the past few seasons. He recast classic Fifties frills and cotillion shapes in deconstructed denim spliced with tulle, lace, a touch of plaid, striped T-shirts and denim damask. The dresses hung loose off the body with utilitarian nonchalance. Layered over plain white T-shirts, overalls and suspender straps sprouted elaborate skirts. At a certain point Watanabe switched out of denim mode and into khaki, working in printed slips and scarves.

Girly-girls and tomboys were united in single garments, while concert T-shirts and chunky footwear done in collaboration with Reebok and Buffalo rounded out the merch mix. Less adventurous denim lovers will hope for more derivatives from the puffy dresses, and Watanabe teased the possibilities with a pair of perfectly tailored trenches patched up with lace and plaid.