Serre’s spring collection marked an expansion and escalation of strategy. 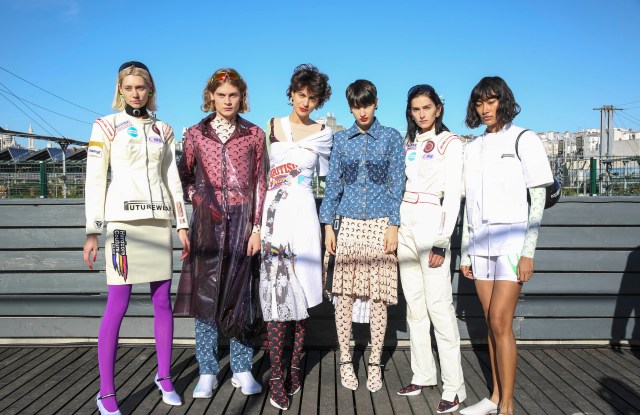 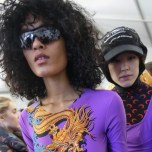 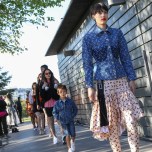 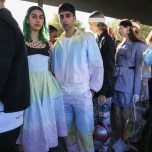 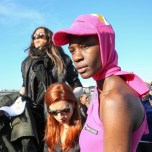 Marine Serre may very well be the new model for a designer starting her own brand in today’s complex fashion/geo-political/digital/hyperconnected world. It’s not enough to bring just good designs to the table, so Serre showed up, just two years ago, ready to engage on all relevant levels. She had logo-ready iconography; references to sport, street and societal/cultural awareness, and ideas on how to confront the fashion’s ecosystem of excess and waste in a proactive way. She also had very good designs.

Serre’s spring collection marked an expansion and escalation of strategy. Aesthetically the lineup, titled Hardcore Couture, reinforced the scarf-dressing, silk moire turned sporty, crescent moon motifs and upcycling of her past shows, with a Formula 1 theme as an access point to new decorative motifs and riffs on racing gear. The show also introduced four new lines within the main collection: Gold Line, which show notes described as “avant-garde ready-to-wear;” Green Line, “upcycled eco-futurism,” assembled from preexisting product; White line, “core brand rtw,” which included collabs with Trylex, Nike, Converse and Melissa; and finally Red Line, which is “couture.” The terms calls for a second set of quotation marks since Serre’s definition of couture adheres to the notion of one-off garments, here, all made from used pieces, rather than the traditional standards of haute couture.

Interesting though it was that Serre felt compelled to break down her still nascent label into subsets, it felt needlessly complicated. The collection presented cohesively as a whole. Without her call-outs that denim was part of Green and the show concluded with Red, it would have been difficult to discern which from what.

Though Serre’s point of view is strong, there are still glimpses of the Demna Gvasalia school of thought in her rear-view mirror. New versions of her crescent moon, on bodysuits, tights, tight-covered Nikes and Converse, and a dress with a bralet over it, as well as pieces stamped with slogans from her past collections — FutureWear and Radical Call For Love — were present. From a branding perspective, the label is primed for those who want to wander over from the Gucci/Balenciaga/Vetements/Off-White club.

The upcycled pieces were her most interesting proposition. The show closed with riffs on classical couture shapes made from old stuff. A voluminous black jacket was embroidered with souvenir keychains. A draped dress was made from used white sports tees. A mermaid gown had a scuba suit bodice and pouf sleeves and a ruffled skirt done in children’s bed sheets. Grungy reworked vintage is nothing new. Serre’s version struck a chord of ironic cool that rang familiar. What is sincerely cool is where she could take her commitment to working with preexisting materials — there’s a lot more out there than your brother’s old sheets and T-shirts.