The designer went with unusual color mixes for many a look. 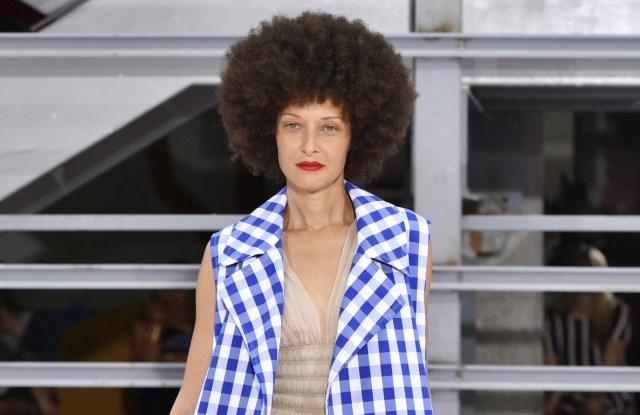 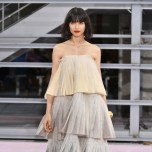 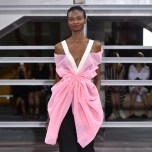 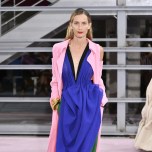 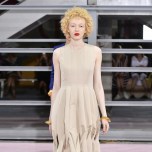 Maison Rabih Kayrouz’s spring collection was a playful mash-up of one-off creations and ready-to-wear pieces, with a focus on pop colors. “I believe this is the way things should happen. I don’t believe in ready-to-wear and couture. I believe in maisons and couture houses and designers,” he said.

Kayrouz added he was inspired by the woman he dresses and what she likes to take along while traveling. “I just wanted to really express what I love. I’m living between Paris and Beirut. I’m living between Orient and Occident,” he continued. “I wanted to show all the know-how of my maison.”

The designer went with unusual color mixes for many a look, such as the fluid silhouette layering a candy pink cotton coat over a draped asymmetric royal blue chiffon dress with a plunging V-neck and bottle green trousers. Yellow shoes finished the outfit.

Some standouts for the season were the long shirtdress in painterly red-and-white stripes and cutouts at the shoulders, and an emerald dress with a ruching effect at the neckline worn with a royal blue jacket.

While some looks were a bit busy, such as the tiered gray-and-black tulle skirt paired with a pink, cinch-waisted top with shoulder cutouts, and the collection meandered sometime, in its parts there were rich pickings for fans of the house — plus some newcomers.

As is now tradition, a performance element infused this Maison Rabih Kayrouz display. It was set to live music played with zeal by the Turkish and gypsy brass band Haïdouti Orkestar, which stood aloft in a stairwell of the cavernous Le Consulat multipurpose space. There was also a cameo appearance by Lebanese blogger Nour Arida.