The casting reflected the idea of real life and family, with moms, dads, kids — including de Libran's son — and even puppies, one of which peed as it walked the runway. 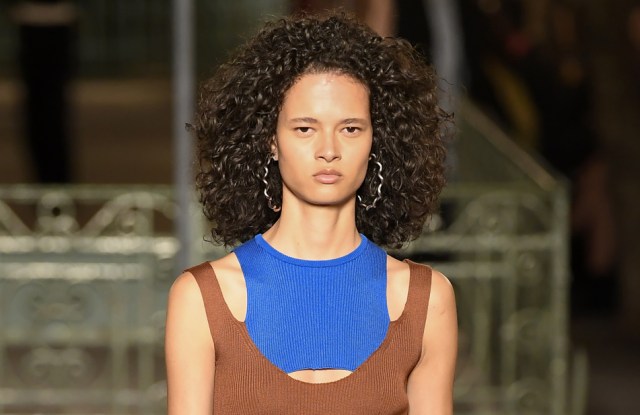 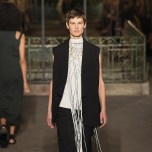 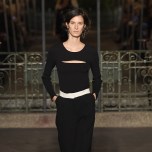 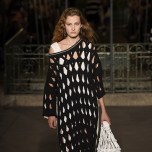 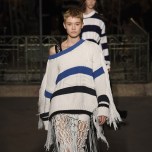 The concept of street fashion took on a whole new dimension with the show staged on the newly named Allée Sonia Rykiel portion of the Boulevard Raspail, a stone’s throw from where the iconic flame-haired house founder lived and worked.

Joined by Nathalie Rykiel, Paris Mayor Anne Hidalgo unveiled a plaque before the show. Guests were seated on benches under striped awnings strung with lights, in place for Sunday’s organic food market, the “weekend obsession” of the house’s creative director Julie de Libran, as a fellow woman of Saint-Germain. And therein lay the link to the collection, the first, according to the show notes, to consistently use materials that are “kinder to the planet.”

“This place reflects the sense of responsibility I have always felt as a creator, producer, mother,” said de Libran, who described the easy collection as “Sunday rules dressing.”

Rykiel’s essence could be felt in the array of off-the-shoulder looks, including the signature slouchy oversize sweaters in open-gauge weaves, poor-boy sweaters and stripes. Ditto for the opening black looks with slits, albeit with a leaner, sharper attitude than what the house is known for.

The casting reflected the idea of real life and family, with moms, dads, kids — including de Libran’s son — and even puppies, one of which peed as it walked the runway. It doesn’t get more real than that. Members of Rykiel’s family, including her sisters and granddaughters, were in the audience.

From the black-and-white tank dress in handcrafted leather macramé  to the summery raw-edged white dresses with black obi-style belts, the collection had a strong resort feel to it, heightened by its bounty of breathable materials and mesh layers. More austere in mood was the wrapped, draped and sliced suiting, which was less convincing.

Cementing this emotional fashion moment, the models for the finale sauntered through the alley toting market bags packed with fruit and vegetables, treading in the footsteps of Rykiel while paving the house’s new sustainable storyline.