Great expectations for the brand — and founder Thomas Burberry's Victorian pioneering spirit — got Tisci all fired up for spring. 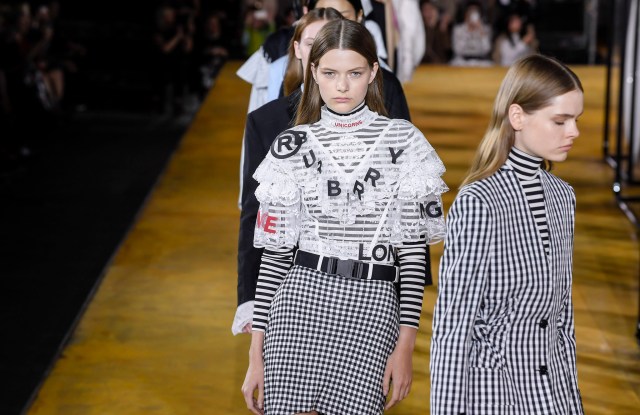 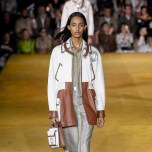 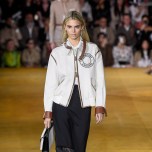 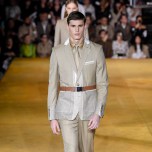 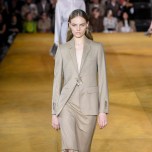 Riccardo Tisci is thinking big for Burberry, from the supersize scarves flying behind models, pinned to trenches or knotted around waists, to the runway stage, which the designer decorated with giant white speakers. Vast and round, they resembled jet engines, or a Dr. Seuss-style landscape — but instead they blasted out a mix of pop and dubstep by DJ William Djoko.

Great expectations for the brand — and founder Thomas Burberry’s Victorian pioneering spirit — got Tisci all fired up for spring. He looked back to that era, whipping white lace into long, slim dresses or lavish, rippling collars; working corset details into tailored jackets; stretching a trench straight down so that it swept the floor, and creating hand-sketched, painted and collaged animal prints — including a monkey — in a wink to Charles Darwin.

“First we are going to build the identity, and then we’ll develop it. The next steps could be homeware. We’ve already launched perfume and soap, and we even made the music speakers. With time, we’ve matured. We’ve become much more fashion, and we can be lifestyle as well,” said Tisci, adding that he wants Burberry to be about more than a trench and a check.

As he explores new aspects of the brand, he’s also standing by his promise of dressing the whole family — mother, father daughter and son — a broad demographic if there ever was one, although this season the aesthetic gulf between young and old, tailored and street, edgy and elegant wasn’t as wide as in the past.

Newness came in the form of tailored jersey suits, some with corseted jackets, others with fringes swinging from the hem, while those animal print scarves added flourish to dresses, trenches and skirts. A lineup of liquid dresses with rounded statement sleeves had a touch of Victoriana to them and should have a cross-generational appeal.

Tisci lit up men’s and women’s wear alike with rows of winking crystals. They ran down trouser legs, sprouted across trenches, came piped onto the seams of tailored jackets or dripped from the front of a short dress. The designer tossed those sparklers in with the lace and sprinkled them over sheer tulle overlays, adding his own brand of glam to street and daywear.