Kane brought together all the themes that have always fascinated him, from science to fetish and nature, to create his "Eco-sexual" spring range. 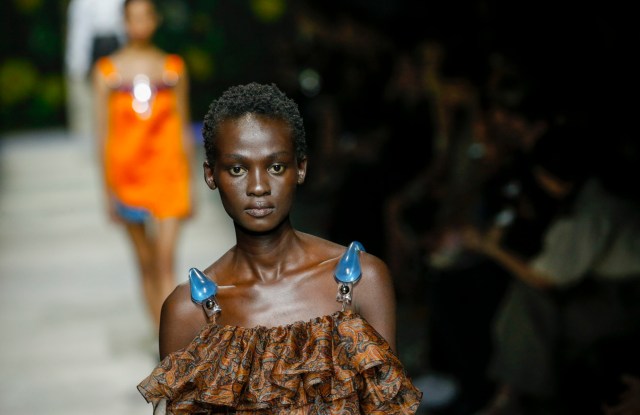 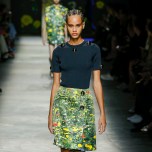 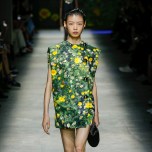 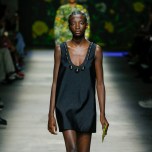 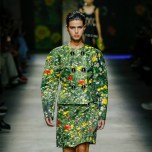 There may be forgiving, languid silhouettes happening all over the spring 2020 runways, but Christopher Kane prefers to tread a path of his own. His spring 2020 collection was filled with directional, statement pieces, from minidresses with daring cutouts to see-through silicone embellishments and frothy tulle trims — nothing for the shy or faint-hearted here.

The range also felt like a highly personal one, as it brought together a lot of the themes that have always tickled Kane’s imagination: science and space; nature; fetish and all things subversive and bad taste.

Pictures of fields of daisies taken in his local East London park were splattered all over pea coats, A-line skirts and dresses; darker paisley prints, cosmic star prints and illustrations of the moon made an appearance later on, as did a striking cloud print seen on a barely there minidress.

The overarching theme? “Eco-sexual.” It was emblazoned as a logo over sweatshirts and dresses and referred to people who fetishize nature and really believe in the magic of it, Kane being one of them. True to his individualist spirit, the designer was also quick to dismiss that the nature prints were a statement to the current environmental crisis, as much as the timing might suggest otherwise.

“That’s where we moved, because after the highly charged fetishes of the balloon and the rubber [we explored in the last two seasons, it was the next thing because I’ve always loved science and nature,” the designer said backstage.

As he was going down the personal route, Kane also brought back some of his greatest hits from previous seasons, including neon lace dresses and midi skirts and extra-large crystal embellishments.

They were a welcome addition to the range and felt as relevant as when he first introduced them half a decade ago. There were also plenty of exciting new ideas, particularly the graphic cloud patterns, the cosmic prints that were pure Kane and a series of chic broderie anglaise shirtdresses and embellished knits had commercial legs, too. But there were perhaps a few too many ideas and Kane could have definitely nixed the florals and the paisleys to keep his focus on those stronger elements.