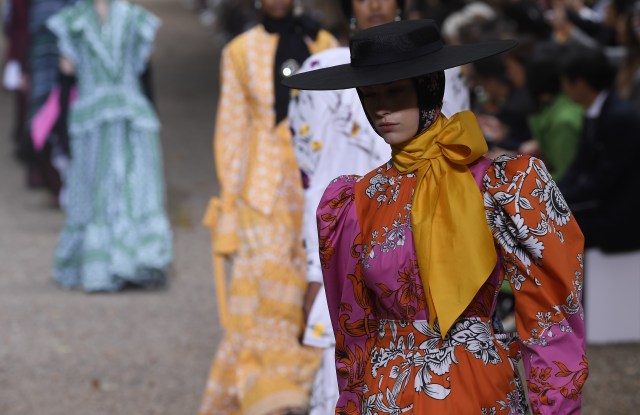 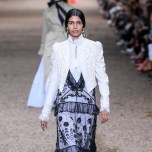 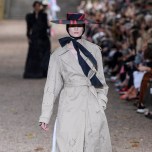 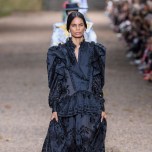 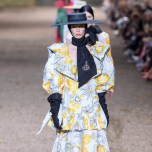 Between rows of majestic oaks, a cast of self-assured, proud women strolled a gravel path enveloped in colorful, tiered and folkloric finery.

Erdem Moralioglu had found another exceptional woman from the past to feed his imagination: Tina Modotti, an Italian-born silent movie star, model and photographer turned radical communist, whose exploits in Spain and Mexico inspired the busy prints, fringing, capes and flat-brimmed hats.

Some might say the designer waded into risky territory, given how vigilant the Mexican culture ministry has been in protecting its textile heritage, not forgetting the Internet watchdogs ready to pounce on any whiff of cultural appropriation.

Moralioglu shrugged off such concerns backstage, saying: “My work has always been about a narrative and a woman, a specific woman and it is about her life and her life is going to be spent in different places.

“I was imagining this woman and kind of almost looking backwards in time and each outfit was like a postcard of a different stage of her life,” he added.

Postcards often depict idealized vistas, and so it was often hard to imagine these prim, voluminous and ruffled confections — some on the cusp of ungainly — in contemporary life, at least beyond the fanciest of occasions.

There was a hint of Christian Lacroix in the exaggerated, puffed sleeves, intense colors and meaty ribbons knitted at throats and waists. Mixed in with long, structured gowns with couture airs were some striking trench coats with broderie anglaise effects and dustings of grommets, which seemed to capture the mix of romance and revolution the designer was after.