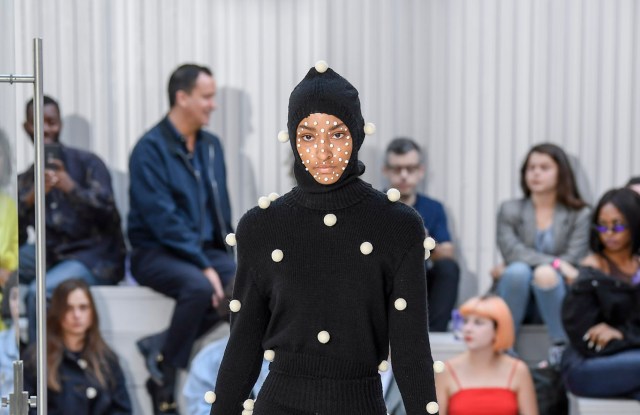 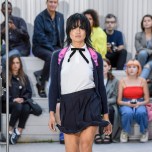 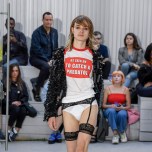 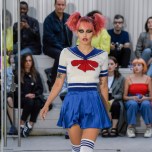 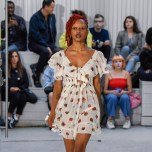 Romanian-born Sarca worked at Ashish as a women’s wear designer before she set up her own brand. She is a firm believer in circular design, mixing upcycled old sneakers with vintage heels in her home in Seven Sisters, a north London neighborhood. Her debut collection will be sold exclusively at London’s LN-CC.

Wrighton is the favorite of the local press. Following in the footsteps of Gareth Pugh — and, farther back, Vivienne Westwood — he is the latest member of the antiestablishment, antihero clan.

Titled “I’m slowly turning into you: A virtual unreality,” his second season at Fashion East focused on the unfortunate and uncomfortable aspects of cyberspace, especially Jessi Slaughter, a YouTuber who went viral at the age of 11 for bragging about their beauty, popularity and alleged sexual relations. However, the concept was bigger than the almost costume-like clothes. The octopus sweater with eight sleeves and the jacket made of hair clips were fun, but where the brand is going remains unclear.

Wang, who has a day job at Marni as a women’s wear designer, showcased her final and strongest collection to date at Fashion East. A continuation of her modern and personal portrayal of traditional Chinese femininity, she upgraded her looks with luxurious fabrics and Chinese embroidery.

Inspired by the Chinese classic opera “The Peony Pavilion” by Tang Xianzu, Wang’s spring 2020 collection told the story of a forbidden Chinese love affair. The lead character, Cui Hua, falls in love with a female cousin in a culture that strictly forbids same-sex relationship.

Wang used the peach as a symbol in her designs, embroidered on dresses and bags. The peach means longevity in Chinese culture, but it’s often a sex symbol in the West. So people from different backgrounds would perceive the dresses differently. This is one of the many things Wang does with her designs, trying to play a good girl, while being a rebel at heart.