Simon Holloway has his own, unique, bohemian and layered take on less-is-more lifestyle dressing, which this season was inspired loosely by the Memphis art movement. 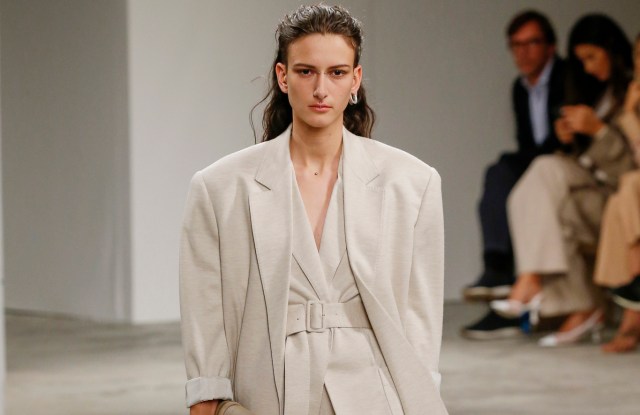 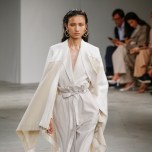 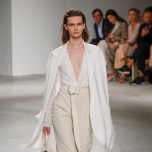 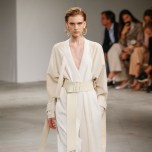 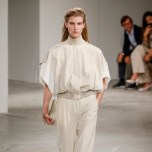 The business of luxe, tailored ease is thriving under Brunello Cucinelli and The Row’s Mary-Kate and Ashley Olsen. Agnona creative director Simon Holloway should be in the same fashion conversation. The designer has his own, unique, bohemian and layered take on less-is-more lifestyle dressing, which this season was inspired loosely by the Memphis art movement.

“It’s a love letter to a certain Milanese style based on a recollection from the Eighties,” he said backstage. “I started with a picture taken outside the Memphis showroom in 1981, thinking about that time when Italian ready-to-wear was the news in fashion…It was always about incredibly luxurious daywear cut in amazing fabric.” (About 80 percent of Agnona’s fabrics come from the Zegna Group.)

The show opened in a neutral palette, with pieces in a hundred shades of cream — a blazer tucked into paper-bag-waist trousers with a mixed knit and woven cape thrown on top; a trench or bomber made from spliced-together knit and woven fabrics to beat the heat; a coat over matching blazer over tapered pants, all as soft and comfortable-looking as a tracksuit. These were lovely layers to live in when you have the kind of luxury lifestyle where dirt doesn’t exist.

For a fresh take on dressed up-dressed down tailoring, Holloway dipped into the archives to find checked Seventies and Eighties Agnona fabrics he had reworked and rewoven in silk, wool and linen. He used the resulting clashing checks on relaxed suiting that paired pronounced-shoulder coats and jackets belted at the waist with unique slouchy pants that tapered to a point-toe slip-on resembling an haute Moroccan slipper.

His Memphis story played out in striking pastel (lavender, aqua, pink) shirts or shirtdresses belted over pants, and a super chic, pink-belted, abstract print pantsuit. Chunky chain-link necklaces echoing the links of Agnona knit added another Eighties nod, without being so vintage as to be trendy. “These are investment-grade clothes you should never throw away,” said Holloway of his quest for timelessness. “You maybe put them away for a while, bring them back out and then hand them down to somebody you love.”