The designer opted for raw fabrics to craft his elegant evening silhouettes, which were finished off with trendy seashell single earrings. 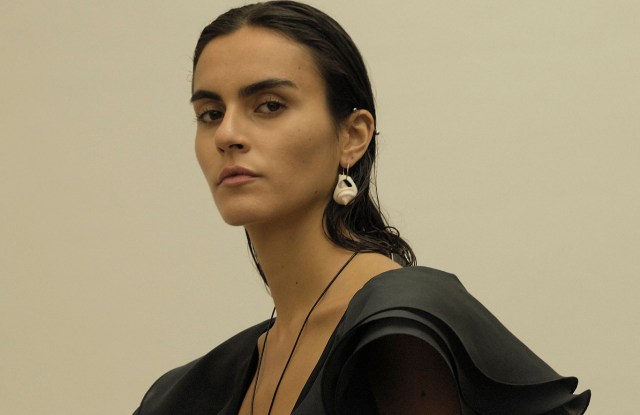 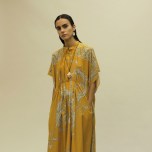 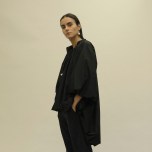 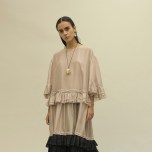 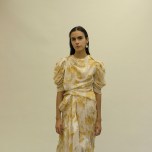 Albino Teodoro is setting out to conquer the red carpet. “The brand is known for its tailoring and structured pieces, but I’ve decided to develop softer silhouettes, something a bit more couture,” the designer said at his presentation, adding that he is in talks to dress actresses based in London and Los Angeles.

The aim was to create subtly feminine eveningwear that doesn’t feel forced or overly glamorous. This was achieved thanks to the use of raw silk and cotton, preventing fabrics from being too shiny and giving garments a modern twist. “I like the idea of a couture shape, but not the couture feeling,” said Teodoro, gesturing to an elegant black cotton shift dress with raw organza balloon sleeved. “Instead of using silk, I used cotton to make it more easy and contemporary. I don’t like the shininess of silk duchesse.”

A chic white crepe jumpsuit hinted at Nineties minimalism, while a raw georgette silk dress with fil coupé motifs, elegantly draped at the shoulders and fringed at the hem, was inspired by the work of neoclassicist painter Ingres. The designer pointed out the slightly rough finish of the fabric, which was used as it was sent out from the manufacturer with no added finishes or washes, a choice that also saves water as a result.

The collection hit the mark perfectly. Even the tailoring was made poetic: A black blazer with puffy raw organza shoulders could also be worn as a blouse, its sheer back revealing a suggestive glimpse of skin. The looks were finished off with very on-trend single earrings and long necklaces on which dangled simple seashells.