Called Color Wave, the second runway show held in Milan and designed by artistic director Jean-Charles de Castelbajac was inspired by the sea and traveling through the Mediterranean ports. 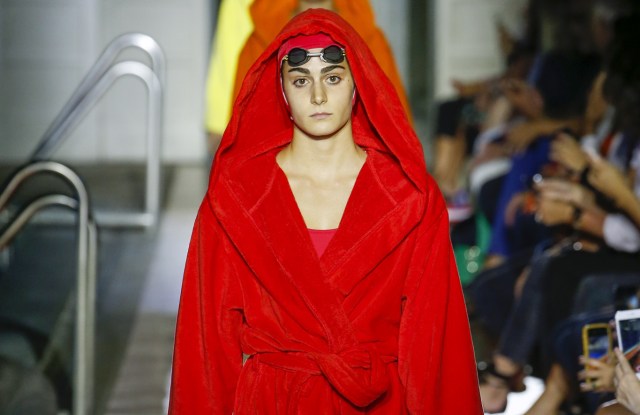 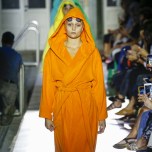 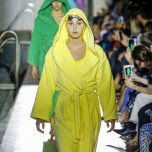 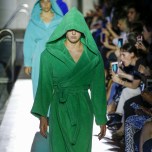 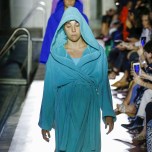 What better way to dive into Milan Fashion Week than being jolted right into next summer by an explosion of colorful looks paraded poolside?

Called Color Wave, the second United Colors of Benetton runway show held in Milan and designed by artistic director Jean-Charles de Castelbajac was inspired by the sea and traveling through Mediterranean ports. “I saw the connection with water and sailing looking back at the history of Benetton,” said de Castelbajac ahead of the show.

To be sure, executive president Luciano Benetton is himself a passionate sailor. “All great discoveries were made with the help of water, even training astronauts and testing their spacesuits in underwater conditions,” said the designer, who is keen to work with natural and non-toxic dyes and presented a trenchcoat made of paper, reusing bags employed to carry flour or cement powder, and recycled fibers, treated to be waterproof.

The effort is commendable, although the coat looked a bit stiff compared to the other looks, which epitomized ease and fun. Paraphrasing Miguel de Cervantes, de Castelbajac touted the importance of expressing one’s inner child. Cases in point: A minidress covered in striped mini T-shirts or a knit dress sporting a patchwork of tiny tricot dresses. “Looking at our archives, Benetton used to sell small collections of knits packed in a suitcase, so I thought it would be only right to go back to that,” he said.

In addition to celebrating Popeye the Sailor Man, reproduced on T-shirts, these as well as skirts were printed with postcards of Saint-Tropez or Hydra; rainbow floral patterns were mixed with stripes on long flowing skirts and raincoats; graphic anchors were splashed on button-front dresses, and cheeky pink and green checked miniskirts were paired with University of Colors sweatshirts. A simple and prim blue dress received the Benetton treatment as the front fanned out with yellow, orange, red, bright green and cobalt blue pleats. Larger pleats in this palette sneaked out of a laser-checkered denim kilt.

There were also sweatshirts and T-shirts printed with images from Oliviero Toscani’s storied advertising campaigns — a wolf kissing a lamb, or the more controversial black and white mating horses, to show the “revolutionary nature”of the photographer’s work to younger generations, said the designer. The show was coed and de Castelbajac said he was tasked with further developing the brand’s men’s wear, which included drawstring jeans made with natural mineral dyes, peacoats, and a modern take on a pin-striped suit.

Accessories are also clearly one of the priorities, given the plethora of ankle socks and tights alternating nude and colored stripes, sneakers and platform sandals with colored stripes — “like a sandwich,” said the designer.

While a swimming team showed their skills in the water, guests were also treated to a breathtaking performance by three diving champs: Giovanni Tocci, Noemi Batki and Gabriele Auber.