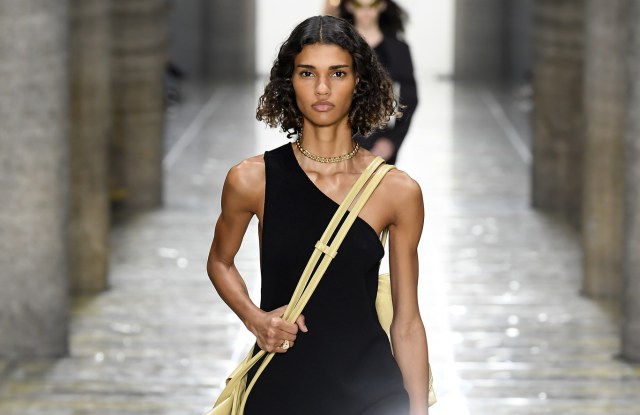 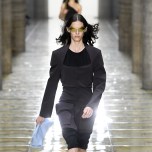 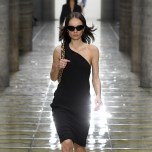 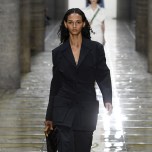 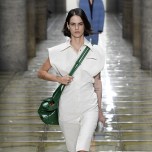 Lee’s appointment at Bottega came with high expectations buoyed by his Phoebe-centric résumé; he was a longtime assistant to Phoebe Philo, now on industry hiatus (because no one wants to think she’s exited fashion for good). Insider-celebrated, he was also green in the ways of fronting a major brand, and in connecting to women on the emotional level that made Philo more cult goddess than mere fashion star.

Would Lee command a slice of the Phoebe-loving population longing for courtship? After his second runway on Thursday, the answer remains a giant question mark. One point is very clear: Lee has a long way to go, both in clarifying his vision and refining his skills. After the show, Lee said this collection was about “solidifying icons…the things we’ve become known for.”

But what are the Bottega icons? There’s a very specific, very famous handbag treatment that Lee has translated to clothes and shoes. And he listed, “the pouch bag, the kind of ease, reality of dressing.” But are those identifiable codes? In fact, does Bottega really have a ready-to-wear iconography? If yes, what is it, and how does he advance it? If no, how does he create it? Lee said his goal for spring was an expression of ease, and that the first thought he wants people to associate with the brand is of “living in the moment, enjoying life.”

Yet these clothes felt laborious rather than easy, for both men women and men, though more so for women. The lineup drew from that Eighties-Nineties transition period when power dressing morphed into something with a cooler audacity, but it lacked the street cred of the master of that moment, Helmut Lang. Lee had plenty of interesting ideas, but his flourishes of construction often read as tricky. As for the joy quotient, often cumbersome clothes in a mostly dour palette make unlikely transmitters of joie de vie.

Lee is in an enviable yet tough position, heading a major brand owned by a major group with a penchant for grand runway statements. Not every newly installed designer at a major house is ready for the grand statement. A year into Lee’s tenure, it’s clear that his Bottega remains a seedling that needs considerable nurturing on the way to full-flower fashion identity.

Bottega Veneta’s Bags Will Soon Have a Larger Home