At Gucci, Alessandro Michele mused on Seventies sexy, with a nod or two to you-know-who. 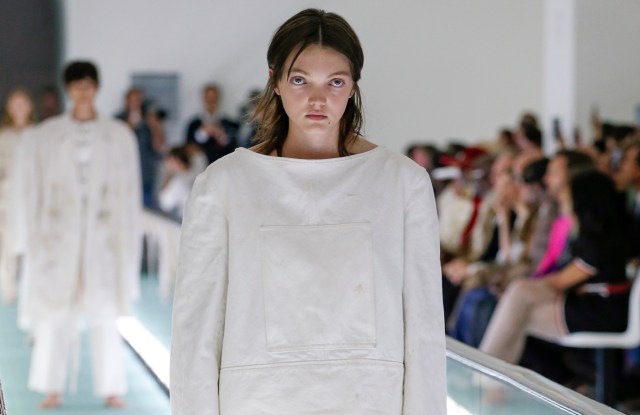 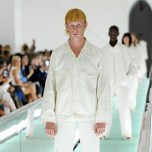 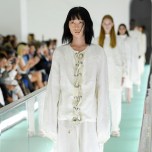 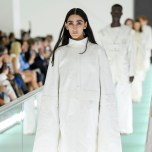 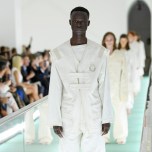 It ended with a wow! On Sunday afternoon, Alessandro Michele closed the Milan season with the wow of restraint, a concept until now antithetical to the Gucci that he awakened from dormancy four years ago in an eruption of heady, madcap overstatement. It was a smart collection, packed with strong, very wearable clothes.

Upon his arrival at Gucci, Michele bemoaned the speed of fashion and intended to chart a steady, consistent path from season to season. And so he did (albeit an out-there take on steady). With it, he rocked fashion. But there’s a time to reap, a time to sew a different kind of clothes. Only a few seasons in, naysayers started musing about the need for Michele to show “what’s next?” Now, he agrees. In a conversation on Friday, he noted the need for a new direction, lest he become bored. He said he had drawn from the brand’s dual-decade golden roots, the Seventies and Nineties (give him credit for acknowledging that Tom Ford once did some work there).

Michele came of age in fashion during the latter, “a very beautiful period.” He views it as an age of beauty and polish, defined by the kind of fashion rules that today have gone by the wayside. One of the most obvious: In sexiness lies power. He thus posed the question, “What happens if one of my girls should try to be sexy?”

The answer is that she most often looks fabulous, save for those exposed-nipple looks (why do that to the models?). And she still finds plenty of room to express her individuality. So, too, the guys in the Gucci room. Hardly shrinking violets, their outfits nevertheless will appeal to men less sartorially adventurous than Jared Leto.

Still, Michele didn’t just jump into Gucci’s new sexy; he is not a linear thinker. Nor are his program notes as clear as his conversation. In-person talking points: “Sexy! Nineties! Rules! Freedom! Tom! Miuccia!” OK, got the drift. The written missive: “Can [fashion] suggest experiential freedom, ability to transgress and disobey, emancipation and self-determination? Or fashion itself risks to become a refined device of neo-liberal government that ends up imposing a new normativity, turning freedom into a commodity and emancipation into a broken promise?”

That pondering on paper segued to the show’s opening, a lineup of characters who wore variations on white-canvas institutional garb, some with massive back buckles, and stood trance-like on airport-like moving walkways. (Might Michele hear some fallout from the P.C. police? He might.) Nineties, yes, but not the sexy kind — oh, no. Rather, these unfortunates referenced the most extreme dystopian musings of another genius of that era, Helmut Lang.

But then, they were conveyed over (or back to) the cuckoo’s nest and out of sight. Then, out came Michele’s pretties, young women and men who acknowledge but take ample liberties with fashion rules. They love smart tailoring, logos and a manageably audacious color sense in jackets that swung more Seventies than Nineties. That said, boldly colored men’s suits nodded to Gwyneth Paltrow’s famous red tuxedo. Other Tom-isms: a shirt opened to there and tucked into pants (hello, Amber Valletta) and a graphic floral cut-out motif, the reference perhaps less obvious (unless there’s an original piece in your closet).

Yet, as Michele forewarned, “I am still the same…It’s me, but it’s like I want to play a different song.” There’s still plenty of charming dissonance to the tune. The nearly-nakeds aside, Michele’s is not, shall we say, a Kardashian notion of sexy. His models sometimes flaunted patterns and silhouettes of the deliberately awkward ilk, and favored wacky accessories — riding crops; a giant sparkly butterfly broach on a men’s lapel; eyeglasses that would demand attention, even without massive plastic librarian-chain holders. But it was all worn with greater restraint than in the past. And more importantly at retail, the clothes were intrinsically simpler, with the designer taking a (much) less-is-more approach to the decorative flourishes he loves.

Michele said his goal was to stave off boredom — his own. But clearly, he sought as well to hold the attention of his audience and ultimately, his customers. At least regarding that first constituency, once again, he fascinated.

Gucci’s Alessandro Michele Uses His Platform to Speak Out

WATCH: The NYFW Spring 2020 Fashion Trends You Need to Know