The collection had 47 different shades — on as many models — and no two colors were alike. 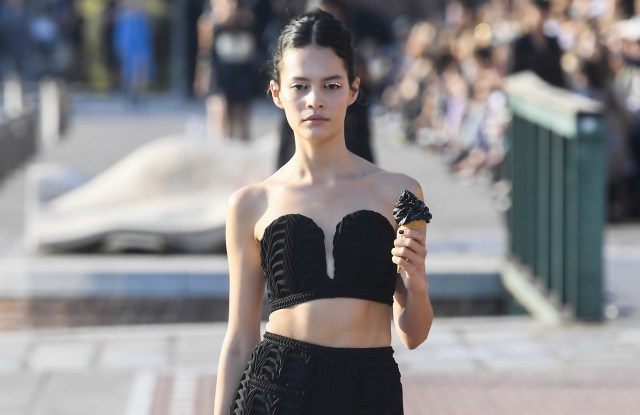 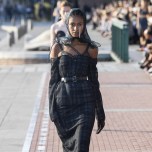 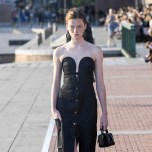 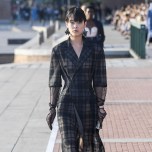 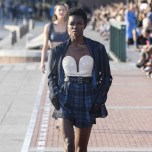 The last of the summer sun lit up Marco de Vincenzo’s show on the banks of the Naviglio Grande on Friday evening, and it felt like aperitivo hour had arrived, although there wasn’t an Aperol Spritz in sight. Instead, de Vincenzo served his guests a cocktail of color and texture.

His collection had 47 different shades — on as many models — and no two colors were alike. There was a tailored plaid suit with a sheer overlay the color of a Campari orange, rosé-toned skirts and bikini-style tops with zigzag textured surfaces, and ruffles and flounces recalling a cocktail made with dark red bitters.

“It’s my human rainbow, my first monochrome collection,” said the designer, adding that he wanted to make a statement about multiculturalism, inclusivity, and his belief that “fashion is for everybody.” He even cast friends to walk the show alongside professional models to prove his designs can work on all sorts of women. Some models carried ice cream cones that matched their outfits.

The designer created lots of 3-D effects, too, twisting and pleating candy so that it resembled ripples of soft-serve on elongated strapless tops, and matching midi skirts. There was macramé; laser-cut holes on breezy dresses, and tulle and crochet joining forces on a sparkling red skirt.

The designer said he’s “obsessed” with transforming materials, and it certainly was an inventive approach. The show, too, was poetic: At the end, models gathered into color groups and posed on the curving bridge that joins the two banks of the canal.

The collection was uneven, though, with clothes often looking bulky, with too many layers. All those textured, mid-length skirts weren’t flattering, either. De Vincenzo was at his best with the simpler silhouettes, a high-waisted dress with short puff sleeves; all the hole-punch styles and a silvery green dress with a breezy pleated skirt.