The collection really took off when evening fell, with acid-bright jersey dresses with padded shoulders, sliced and diced to reveal a sliver of skin here or there. 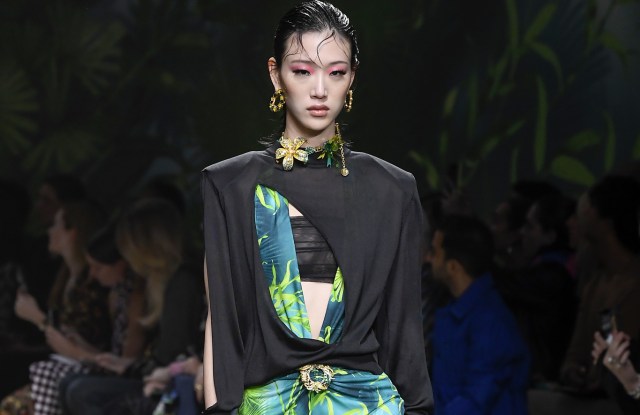 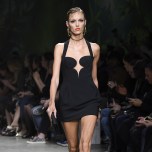 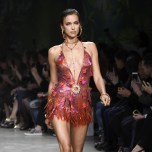 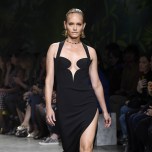 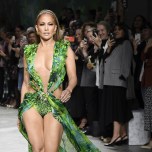 Talk about a J.Lo jaw-drop.

The diva herself closed out the Versace show Friday night, reprising what may have been the first viral fashion moment in history with an IRL runway walk for the ages.

It was the second time in the spotlight for the jungle print gown, which became an instant icon when Jennifer Lopez wore it to the Grammy Awards in 2000. Not only was the plunge-front dress depth-defying (How did it stay on then — or now —on the age-defying actress?), it changed history, when news traveled from Hollywood red carpet to Internet superhighway.

“I’m kind of proud to have inspired Google,” said Donatella Versace with her trademark humility during a pre-show preview.

Google was still in its infancy, just two years old, when fans burned up cords and cables searching for “Jennifer Lopez’s green dress.” When their queries weren’t turning up what they really wanted — a picture! — the tech giant realized it needed a new visual search engine, and developed Google Image. “For the first time, fashion inspired technology,” said the designer, noting it was also a validating moment for her personally, when she realized the dress had stopped the world. (She took the design helm at Versace in 1998, one year after her brother’s death.)

The dress was a symbol for a woman “who wants to show herself and be proud,” said Versace, connecting it to her own brand of feminism. So, 20 years later, in the aftermath of Harvey Weinstein, #MeToo and Donald Trump, when Lopez’s feel-good, stripper-con game flick “Hustlers” is a hit at the box office, the designer invited women to cast off their 2019 milkmaid frocks and bring a little sexy back.

Shown under a Pantheon-inspired dome ceiling and bronze palm sculpture surrounded by digital projections of the leafy print made using Google Tilt Brush technology, the collection took the dress, as we’ll call it, as the starting point for a jungle party.

But first, after a somewhat wobbly step into grunge last season, Versace hit the reset button, opening with her signature strong tailoring. Sharp-shouldered, black minidresses and a trim black coat with sculpted sleeves accented with the house gold hardware made a potent argument for sexuality as a power tool. (And indeed, some of the charms dangling from gold belts were actual tools, the Google hardware wrench, most notably, in case you were wondering how deep this fashion-tech commercial collab went — it went deep.)

Versace also put an haute spin on tie-dye, using the technique on leather to give it a marbleized look, as on a standout aqua-hued leather trench. Tie-dye was also fused with Prince of Wales check on blazers, shorts and minis, which, like a tiki drink after work, sounds like a bad idea in theory, but actually looked cool in most iterations. (Tie-dye tights, though, were overkill.)

In an effort to appeal to everyone “from Millennials to moms,” as the designer said, there was a heavy dose of streetwear with a tropical punch (the famed jungle print came in its original green, and a new fiery orange-red version) on anoraks, shorts and logo T-shirts, bejeweled pool slides and more. A jungle print pantsuit with a shirt cut down to the navel, worn with sneakers, was a new take on the dress for the more modest set.

But this collection really took off when evening fell, with acid-bright jersey dresses with padded shoulders, sliced and diced to reveal a sliver of skin here or there, and minidresses dotted with decorative multicolor palm leaf embroidery as tasty as cocktail garnish. A long-sleeve, embroidered red sequined gown swinging ostrich feathers seemed destined to be another Versace red-carpet statement. But it’s too covered-up for J.Lo, which begs the question: If she is Oscars bound for her role as Ramona in “Hustlers,” how will Versace ever top itself?