For spring, Hanako Maeda riffed on a nautical theme as seen through her signature East meets West lens. 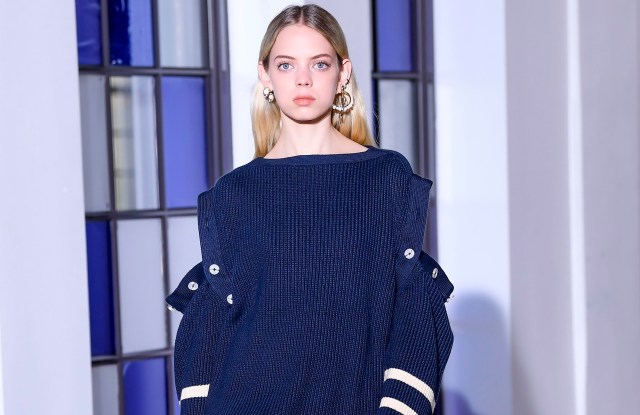 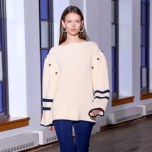 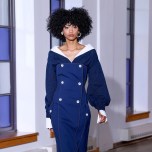 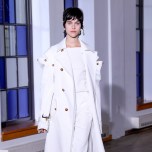 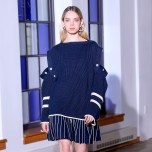 Hanako Maeda’s designs often have a personal connotation, and when conceptualizing her spring outing, she choose the place in Japan her parents are from — Yokohama — a seaside city and one of the first places in the country to open to the west, as inspiration. “It’s similar to Cape Cod in the U.S.,” she said of Yokohama. It’s a place where she spent a lot of time as a child, and judging from her collection, a place that clearly left an imprint on her.

Maeda is a conceptual designer who takes a theme and meditates on it, ushering in new silhouettes and ideas, all variations on her laser-focused ideas. For spring, she expanded on the idea of nautical through her signature East meets West lens.

Several times throughout the show, a piece was shown more than once — for example, a navy chunky knit with a white stripe on the sleeve and flap collar that had a detachable shoulder detail. Once it was shown with the sleeves buttoned up, and then later on in a sandy colorway with the sleeves unbuttoned, forming a new shape. The variations permutated the silhouette, giving her customer a convertibility, another theme she often riffs on.

Japanese raw denim, a fabric she has used in the past, was this time done in a new skinny jean. A blue-and-white shirtdress that was deconstructed and remixed with cascading ruffles was an excellent example of the maritime theme, and double-breasted details that you would find on a navy peacoat ended up on dresses and suiting.

As the show progressed, she moved on to several cocktail and evening frocks; it’s a category she has previously done for private clients — Michelle Obama, Oprah Winfrey and Anne Hathaway, to name a few — but here she rounded out her spring offering with some strong ideas. One floor-length gown had an almost transparent layer of tulle at the neck with crystals that glistened like drops of water fresh from a dip in the ocean, while another had a delicate raw pearl trim; each one was a riff on her oceanic theme. It was a fitting end to a chic, modern and sleek collection.