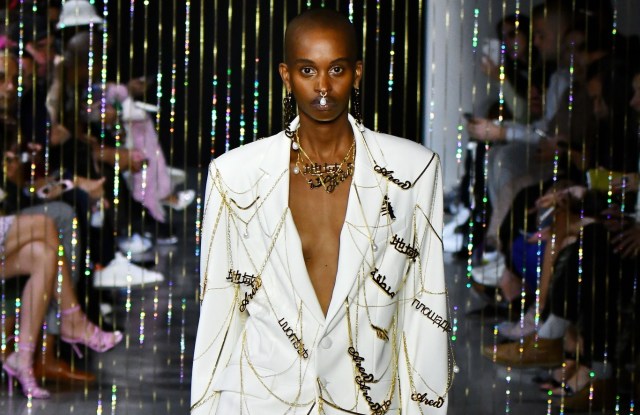 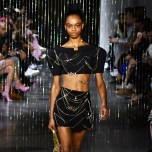 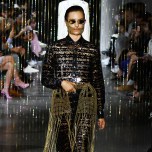 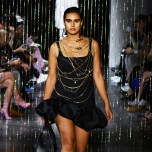 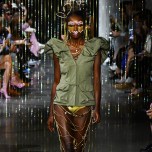 You knew upon entering Area’s runway set that the spring collection was going to be a master class on sparkling, crystal creations. Or, at least you hoped as much. The room was decked out with crystal fringe from ceiling to floors, alluding to how designers Beckett Fogg and Piotrek Panszczyk would use the strands almost like textile yarns.

Fogg and Panszczyk have this glamorous, joyous ease undercut with exuberant experimentation when it comes to design. Last season, they highlighted the commercial viability of crystal-based outfits, ranging from crystal-filled cutouts on a sweater to a full-on poncho. They amped up the usage exponentially for spring — inspired in part by Fifties and Sixties Americana — crafting statement pieces ranging from sculptural to easily wearable and subtle to smack-you-in-your-face extreme.

“This season for us was really about craft,” Panszczyk noted backstage after the show. “Last season you saw all of our crystal cages that were quite fluid but still 2-D.” They pushed the limits on how to make garments three-dimensional, simultaneously challenging what it means for something to be considered wearable. Victorian cages were like body armor on fully crafted lavish dresses, and could be seen as an alternative to a traditional ruffle flourish. It was “kind of twisting these super-feminine elements and making them modern and fresh and cool,” he added.

That extremist approach continued with gowns made of feathers or tentacle-like fringe, and voluminous pastel dresses with poufed skirt hems. Even beauty looks featured crystal-lined eyebrows, tears and a beard.

A restrained touch with crystals as accents worked best, especially against soft tailored items such as belts, shoulder adornments and back drapes. They used name plates and chain details as embellishments on tailoring, too, as another avenue of otherworldly, mixed-media design that people anywhere could understand.

“Even with the beauty and hair story, it’s really about celebrating the girl’s individual beauty. We’re not about one universal look everyone needs to get,” Fogg added.