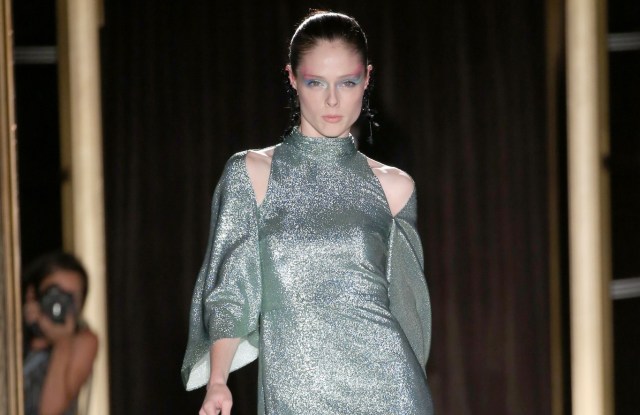 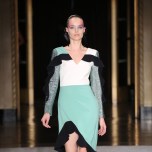 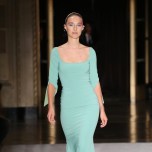 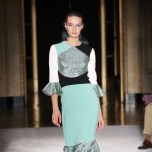 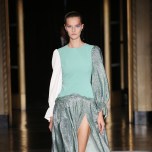 “We all need a little fun in our lives,” said Christian Siriano, sounding a bit exhausted by the one-two punch of New York Fashion Week followed by the Emmys next weekend.

The red carpet go-to, who just announced a new down-to-earth collaboration with J. Jill and wrapped his first season in Tim Gunn’s role of show mentor on “Project Runway,” probably feels like life is a bit unreal right now, which might explain his inspiration: “I was inspired by surrealism, and a lot of Ashley Longshore’s work and playfulness and women’s empowerment.”

Siriano has known the New Orleans-based pop artist for a while, and even came out to support her at a recent exhibition at the Eric Buterbaugh gallery in Los Angeles. The lady herself was part of his show, too, live-painting several canvases of Siriano muses (Lady Gaga, Coco Rocha, Laverne Cox) as models walked by in a palette of hues.

Now, green can be a tough color. Nevertheless, Siriano took it on in full force in this collection, with some iterations working better than others. A plisse evening gown with lettuce-edge sculptural sleeves was green-goddess glam, but a multihued colorblock flounce dress was green-gone-wrong.

An “eye-catching” Surrealist print made for a whimsical update on Siriano’s popular tailoring (see Maye Musk in a heavyweight champion-belted pantsuit), and a red lip-patterned lace made for a novel twist on a cocktail dress.

The collection amped up Siriano’s typical more-is-more way as it continued, ending with a group of gowns with all the rainbow lamé ruffles and tulle trains that little girl and boy fashion dreams are made of. But for all that, the all-black looks were some of the best, including a standout LBD with a matte sleeveless bodice, sequin flyaway sleeves and an asymmetrical skirt that proved Siriano’s knack for fit and flattery.

Siriano revealed he will be taking his collection to Paris for the first time later this month, reprising his runway show with some extra looks: “We discovered that half of our buyers aren’t coming to New York anymore,” he said. A bientôt à Paris!