Stuart Vevers worked an Eighties theme into a savvy, good-looking collection with just the right shot of fun. 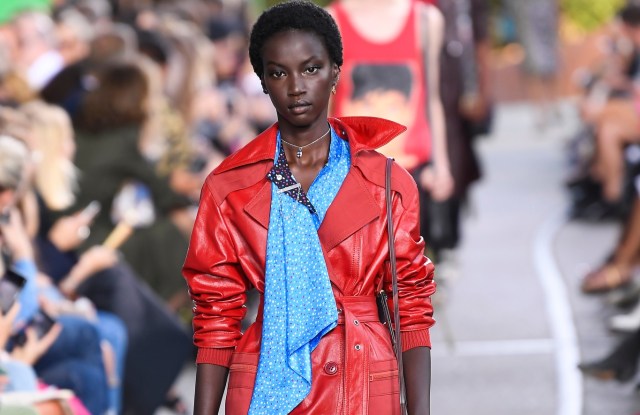 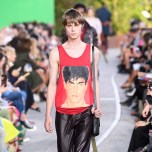 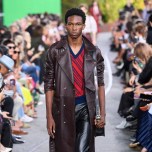 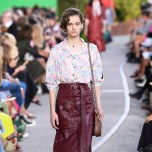 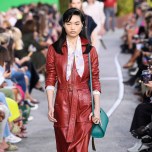 “A new decade calls for some fresh perspective,” Coach 1941 creative director Stuart Vevers said during a preview. One could argue that in the grand scheme of things, the brand’s ready-to-wear is still in its infancy; Vevers launched it from scratch when he arrived at the house six years ago. But no matter, fashion must move on. For spring, Vevers moved on from the gritty Western romance he’s previously worked to a slick urban vibe. “The biggest impact was using our city, New York City, as the main starting point for the collection,” he said. “This collection is very much grounded in reality.”

A reality sprung not only from a place, but a time — the Eighties — which Vevers handled with deft balance in this strong coed collection. All along, Vevers has taken a measured, practical approach while spearheading Coach’s foray into rtw. Starting with outerwear, he worked his way up to a full collection, always from a baseline of chic practicality: The item or category is fully functional, or he’s not interested. Real-world clothes only.

A laudable approach that can translate as ho-hum on the runway. But not here, as Vevers brought fresh thinking to the concept of urban style. He started with an open mind, thinking beyond power suits and biker chic. That meant full-on rejection of the premise that urban-equals-all-black. Turns out, Vevers has a terrific color sense. He worked in a palette of strong colors — reds, teals, a yellow-orange range — for men and women, but in shades and silhouettes that will work in the bright light of the city day. Cases in point: his series of classic outerwear pieces such as trenchcoats and bombers in colors that pop. Similarly, he showed numerous patterns for women and men — mini speckles, pastel geometrics and a pair of guilty-pleasure intarsias, martini and cigarettes. Nor did he shy away from flourish of cut: Dresses and shirts had attached neck scarves left unsecured to fly in the breeze.

Vevers didn’t stop there. He collaborated with the foundation of the late artist Richard Bernstein, whose images of Rob Lowe, Michael J. Fox and Barbra Streisand adorned various pieces throughout the collection. The trio, all unlikely objects of T-shirted hero-worship, brought a sly cheekiness to the lineup. The left-field inclusion of the legendary diva with two young Eighties guys exemplified Vevers’ non-linear thought process. He worked it all into a savvy, good-looking collection with just the right shot of fun to relax the urban-cool vibe.