Mark Thomas and Thomas Cawson dialed up the fashion quotient on the Lang pillars of provocative sensuality and surprising shots of color. 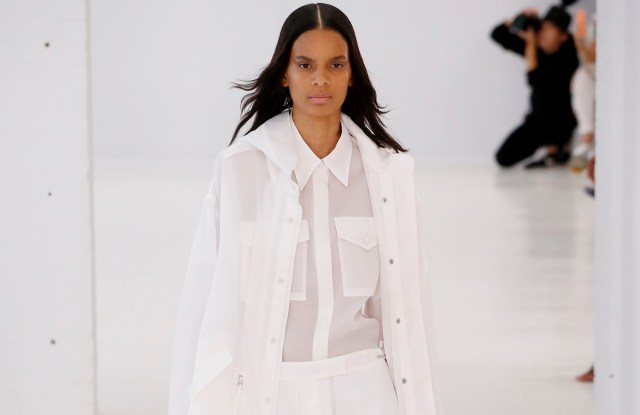 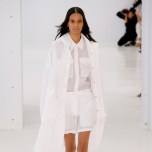 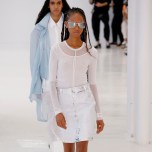 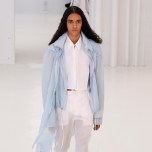 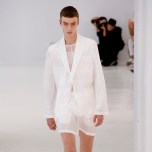 Their approach evolved from last season, setting the direction of where they want to steer the brand and building on house codes without getting lost in the past. It resulted in seductive takes on workwear, inclusive of sheer and sexualized takes on everyday silhouettes.

“It’s totally stripped down,” Thomas said pre-show. He experimented foremost with the idea of weightlessness. Tailored items like blazers, shirting and bottoms for both men and women were cut in sheer organza, while clingy, hosiery-like tops were used as underpinnings for a play on coverage versus sexuality.

The opening looks reflected the clean-cut nature of the clothes, but they were anything but boring. A clingy pleated dress had an iridescent sheen, and shirting could be buttoned open along the sleeves. Other provocative moments included asymmetrically pleated schoolgirl skirts and fine knit tops with the appearance of pre-layering.

The collection focused just as much on drumming up excitement, whether it was punctuating the calmness of neutrals with head-to-toe neons, or foiled metallic pieces inspired by John Chamberlain sculptures, such as a men’s silver leather jacket with white coating rubbed off for an interesting reflective effect.

For Cawson, it was all about exploration. He took the archetype of the five-pocket jean and elevated it through treatments. Highlights included heavyweight denim glossed with iridescent foil, and cracked pants revealing an industrial color underneath.