Creative director Sophie Delafontaine introduced her boho-chic woman to a new decade for her Spring outing. 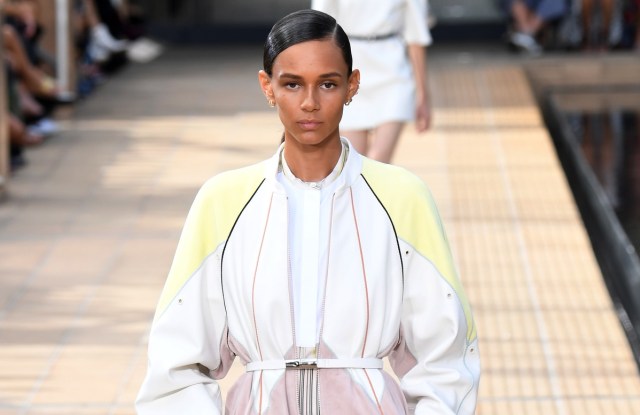 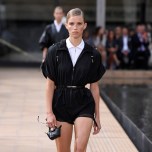 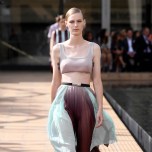 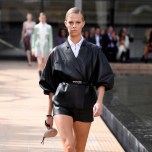 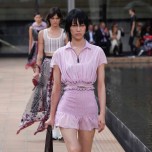 Longchamp’s creative director Sophie Delafontaine is fond of using decades as references. The French brand known for accessories has skewed hippie chic under her watch, and this season she takes her boho girl into the nineties and gives her a sporty redo.

“It’s about a women in between the seventies and the nineties,” she said at a preview before the show.

The collection opened with Kaia Gerber (yes, that Kaia) in a black nylon dress-shaped jacket styled over a crisp white shirt. She made a statement — a strong girl marching past the pool at Hearst Plaza at Lincoln Center as a powerful sun blasted the crowd.

Delafontaine has shown in New York the past few seasons, and she says she gets “great energy from it,” adding, “I wanted to show a color explosion in the middle of the city.”

In fact, the sun and artist Judy Chicago were big influences on Delafontaine’s work, and as the looks glided by, her color story emerged, with saturated pastels, the type you’d find in the eastern sky at sunrise, showing up on silky pleated dresses and ruffed peasant blouses that made the idea clear.

There was a tension between hard and soft here that played out with her materials. Soft feminine silk dresses were paired with a wrestling shoe, as Delafontaine called it, but it looked more like a sock sneaker-boot hybrid. It was a pairing she used throughout, soft but strong. The fringe details from seasons past were long gone, making way for a new, cooler, sporty girlie girl with hints of hippie in a mix of short flirty dresses and even shorter high-waisted short shorts that read like a swimsuit bottoms. Sun-dial prints and rich embroidered suedes, both winks to the house’s long-standing equestrian heritage, appeared on many of the collection’s looks.

The Roseau bag, now a house staple at 20 years old, got a redo with geometric appliqués, and the iconic Pliage came in a super mini size, both of which paired well with her sporty boho city girl.