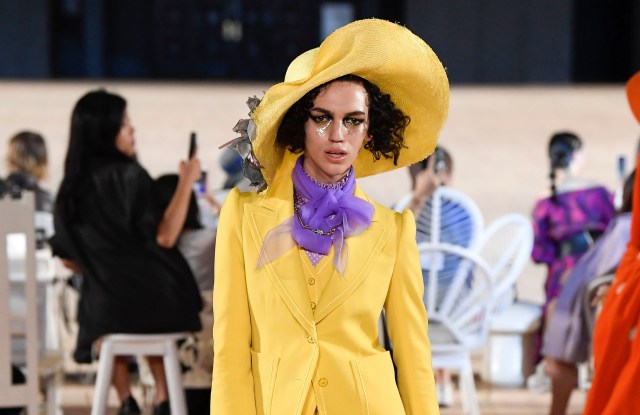 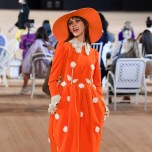 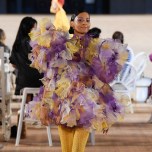 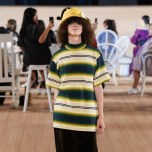 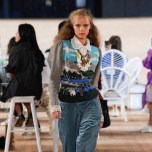 In his show notes and during a preview on Wednesday night, Marc Jacobs acknowledged the Sept. 11 anniversary. For anyone who worked in this industry 18 years ago in a show-related capacity, the two are inextricably linked. “Where were you when you heard the news?” The answer is at or en route to a show; working at a show; casting a show, doing something show. (I was traveling down Fifth Avenue to Bryant Park in a taxi and saw the Towers in flames in front of me.) Jacobs heard the news in a phone call from a reporter — myself. He’d slept in since the night before, he’d thrown a huge postshow party on Pier 54 with views of the Towers. In the moment, carefree reverie. In the aftermath — bacchanal before carnage — a stark reminder of how quickly life can change, and of how little control we have of our destinies.

Heavy material in the lead-up to a fashion show (or in a piece about a fashion show), but given the timing of Jacobs’ show and party 18 years ago, it would have been odd for him not to reminisce. He lost a friend in the attacks, David Rivers. Rivers’ wife, Ricky Vider, also a dear friend, attended on Wednesday.

There’s no seamless transition for turning to the show itself. It was an extravaganza of pure joy and exceptional fashion. Along the way, Jacobs got a bit message-y, in his way. He’s opinionated but not preachy, and not particularly interested in making political statements on his runway, at least not in an obvious way. Here, he used the forum as a performance-piece plea for people to seek “a world of hope and joy and beauty and color and diversity and equality and individuality. And,” he added, “to indulge in the joy of fashion.”

There was ample indulgence on parade here. Stefan Beckman’s brilliantly spare set teased the “everybody’s different” leitmotif. Guess arrived to find the vast Park Avenue Armory completely empty save for an odd assortment of 193 white vintage chairs, each one a quirky vintage find, at the far end of the newly installed pale wood floor. Once everyone settled into armchair, rocker or stool, “Dream a Little Dream” began playing and Jacobs’ colony of characters appeared at once, walking toward the audience, a stunningly turned-out brigade, each with a distinctive coiffure (Guido Palau) and makeup (Pat McGrath) and some, nail art (Mei Kawajiri). And most important, they acted like individuals, not clothes hangers, all smiling and vamping, or not, to suit their characters.

The themes and subplots hailed from the lexicon of things Jacobs has long loved; he noted that certain “loves” resonate more powerfully at some times than others. “The fact that Doris Day died and we looked at a picture of her in a beautiful Norman Norell sequined gown and a coat with a matching sequined lining. Karl Lagerfeld died and we had Karl in mind, and Chanel. None of these things I haven’t loved before,” Jacobs said. “But, you know, [faced with loss], you keep them alive by honoring them, by repeating them, by crediting them and by letting them continue to inspire you.”

And so he did. The clothes ran the gamut from spare to out-there, reality to wonderment. To attempt description would be a fool’s errand. The pictures sing, but pale compared to the reality — the clothes were beyond exquisite, from the simplest knit dress to natty suits to stunning pieces worked with appliqués, embroideries and smocked details that must be seen up close. It all came together in an eight-minute treatise on the delights of no-rules, no-boundaries fashion, and a savvy statement on the importance of fashion as a tool of self-expression. Pure joy, either way.