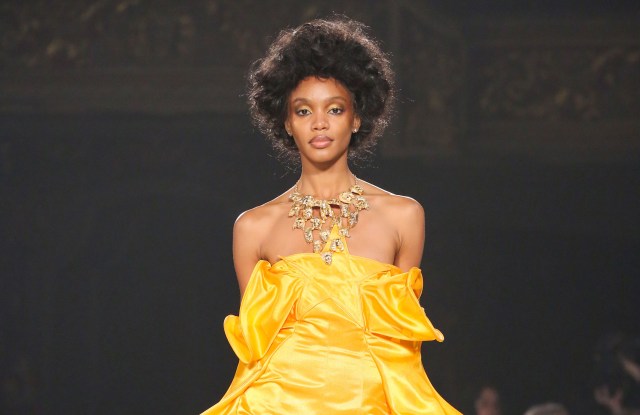 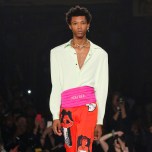 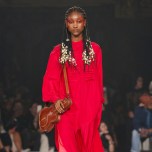 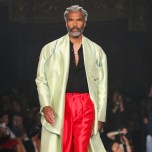 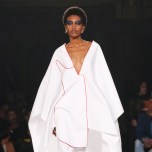 He’s back — Kerby Jean-Raymond decided to skip showing his Pyer Moss collection at New York Fashion Week in February, believing that the timing of what he wanted to say just wasn’t right yet.

The Brooklyn native had one of this season’s more anticipated shows, following the spectacle at the Weeksville Heritage Center last September that found many trekking in the rain to the historic, but unlikely, fashion show locale in Brownsville. For spring 2020, Jean-Raymond held yet another massive show in Brooklyn in yet another unlikely location: Kings Theatre in Flatbush, where the designer grew up. Crowds converged on the historic performing arts venue, which reopened in 2015, including those who had been attending the Tommy x Zendaya show at the Apollo Theater all the way up in Harlem, just to hear exactly what Jean-Raymond had to say this season. His fearlessness in sharing his messages is why attendees flocked to his show on Sunday, forming a long line hours before it began.

Never one to shy away from political or social issues as themes for his collections, Jean-Raymond has stated in the past that he uses fashion as a platform to share his ideas, which over the years have included thoughts on police brutality, mental health, black cowboys and in April the seven women who helped raise him, who were a subject of his “Seven Mothers” film by Director X.

This season he took his audience on a journey through 400 years of African American history to celebrate the freedom that black people have today. He tapped “There Will Be No Miracles Here” author Casey Gerald to kick off the show with a moving speech about Fannie Moore, who was born a slave on a plantation in South Carolina in 1849, and rock-‘n’-roll pioneer Sister Rosetta Tharpe, who influenced some of the genre’s earliest acts, like Little Richard and Chuck Berry.

Gerald connected the story of Moore’s mother, singing “I’m free!” after being whipped by the slave master, to Tharpe. He noted that 400 years have passed since the first slave ship from Africa arrived in Point Comfort, Va., and that the people taken on the boat were not brought to the New World “to sing and shout” and yet Tharpe, who has been called the “godmother of rock ‘n’ roll,” invented one of the most successful genres in popular music. Gerald’s message resonated with the diverse audience, many of whom cheered and applauded.

Collection 3 continued Jean-Raymond’s American Also narrative that began in February 2018. The show was a musical experience led by The Pyer Moss Tabernacle Drip Choir Drenched in the Blood, now bigger than ever, which performed uplifting gospel songs; Tina Turner’s rendition of “Proud Mary,” and hip-hop songs from female artists like “Crush on You” by Lil’ Kim; “U.N.I.T.Y.” by Queen Latifah; “The Beep” by Missy Elliott, and “Money” by Cardi B who, like Jean-Raymond, is part of the Reebok team.

Music has been a big part of Pyer Moss runway shows, but this season Jean-Raymond looked to music more directly as inspiration, with direct references such as piano-shaped front panels and embroidered keys on shirts and cropped jackets; trouser graphics of divas singing and performing; a custom pin-striped pattern that connects guitars, pianos and tambourines, and a crossover leather mini-guitar case.

Looser interpretations included piping on a long robe, shirts and a blazer that resembled the curves and shape of instruments. A column skirt had geometric cutouts, and the silhouette of a grand piano popped up on a red shirt tucked into coordinated pants. The curved profile of a guitar was embroidered on the back of an elongated blazer paired with flared pants.

Jean-Raymond also sent out elegant evening looks, with gowns punctuated by draping and plissé and a focus on the shoulders, which were worked in charming colors, ranging from gold to pale hues of pink and blue.

Colorful and extravagant best described the men’s offerings, which hearkened back to jazz-club performers and club-goers of the Seventies who preferred broad shoulders and bright ensembles; meanwhile, the Reebok partnership continued Nineties nostalgia with modern touches. Actor Caleb McLaughlin opened the Reebok by Pyer Moss portion of the show in a salmon down parka, which was followed by high-collared sweatshirts, track jackets and track pants for men in primary colors and the salmon color palette, dark green and purple on black, and Chicago Bulls-esque red and black on white.

Between the two collections was a collaboration with Sean John, continuing the brand’s streak of partnerships with urbanwear brands like Cross Colours and FUBU, and with Richard Phillips, a black man who was wrongfully imprisoned for 45 years until finally being exonerated in 2017. Phillips turned to art as an outlet during his four decades in prison; his works were featured on a number of ensembles, including a short tunic dress and an asymmetric plissé skirt. It also continued the brand’s partnership with artists for capsules, following Derrick Adams and Gregory Siff.

The audience gave the show a standing ovation as the choir sang a rendition of the gospel song “Make Me Over.” Gerald ended his speech saying, “I’m free, I’m free, I’m free!” and after the show, the jubilation of freedom could be felt in the theater.